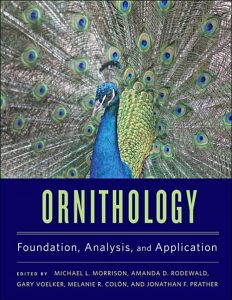 At 1,004 pages, this book is a monster! It is effectively a comprehensive textbook of ornithology. The editors have gathered a team of over 50 contributors and have managed to produce a book of uniformly high readability. However, it is a textbook and seems to be aimed at graduate-student level: an impression supported by a list of ‘discussion questions’ at the end of each chapter. The contents of each chapter are summarised by a series of ‘key points’ and a nice touch is a discussion of the implications of that chapter for management and conservation. The book is lavishly illustrated with photographs, sketches, graphs and diagrams, and these are generally clear, relevant and easily accessible. As is often the case these days, there is a series of vignettes of individual ornithologists, evidently regarded by the editors as ‘significant’.

As to content, as the title implies, most aspects of avian biology are covered: anatomy, physiology, endocrinology, parasitology, flight, moult and acoustics in a series of major groupings, of which those on evolution and speciation, behaviour and migration, management and conservation, and modern-day climate change are likely to be of most interest to readers of British Birds. The last of these is especially well presented, though I was surprised that Humphrey Crick’s landmark paper in Nature (in 1997) does not merit inclusion.

However, only six of the contributors are based outside North America, of whom just Graham Martin is from Great Britain. This, inevitably, gives the whole book an ‘American’ feel, and I suspect that many (most?) sales will emanate from there. Would I buy it? Probably not, now that I am retired. Would I expect British undergraduates to buy it? Again, probably not, though at less than £0.10 per page, it is actually good value. Would I recommend it for my University Library? Definitely.

Personally, I found it a book to ‘dip into’ for particular topics, rather than read at a sitting. Weighing in at around 4 kg, despite its comprehensive coverage and general readability, it is not exactly a book to curl up with after a long day’s birding. But then, you could always buy the Kindle version – which is a little cheaper and easier on the back!