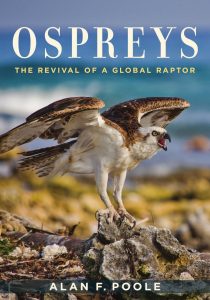 For many years, Alan Poole’s 1989 book Ospreys: a natural and unnatural history (Cambridge University Press) was the ‘go-to’ reference. Thirty years on we now have this new, global overview by the same author.

Ospreys are, by and large, a good news story. They are recovering rapidly from past declines caused by persecution and the harmful effects of pesticides. Humans now help, rather than hinder, by putting up platforms to increase nesting opportunities and, increasingly, by translocating young birds to speed up their return to areas from which they have been lost.

If the recovery of Osprey populations is the biggest story in the last three decades, then progress in the understanding of movements and migration is also a major development. The author’s earlier book pre-dated satellite tracking, and the knowledge gleaned from radio tracking was dealt with in less than two pages. The new volume is able to present detailed figures which plot the progress of migrating birds based on fixes every few minutes. They illuminate a fascinating chapter dealing with migration, including the latest ideas about how Ospreys manage to maintain such a steady course, even out over the open ocean; an ability to sense the earth’s magnetic field is likely to be of critical importance. Technology has also shown how birds use the more limited areas around their nest sites and how they exploit different types of fish when rearing their young. The Osprey is a much-admired bird and those who wish to see it thrive now have far more information available to help their cause.

Interestingly, so many nest cameras and satellite tags have been deployed that a lack of funding and research time allocated to rigorous data analysis often limits knowledge development, rather than the availability of data itself. The former should surely be a priority (ahead of tagging yet more birds), especially when the analysis that has been done up to now suggests that tags may have an adverse impact on both breeding success and survival rates.

The book has an understandable focus on Ospreys in the USA, where the author is based, and the highest concentrations of breeding birds are found, including staggeringly high densities at some food-rich sites. But other parts of the range are not neglected. Work on the restoration of Ospreys at Rutland Water and elsewhere in Britain and Europe is described and there is a profile of our own Roy Dennis, along with accounts of other influential Osprey conservationists scattered across North America and Europe.

Although much has been learnt about this bird during the past three decades, the new book is shorter than the author’s previous review. It is also less formal and scientific in its approach. There are few tables or graphs, references are not cited in the text, and the bibliography lists select sources of further reading rather than providing a comprehensive overview of the literature. This reflects a recent trend, with authors (or publishers?) increasingly deciding there are now simply too many published studies for some subjects to be able to cite them all without unduly cluttering the text and taking up too much space. The more serious student of the Osprey may see this as a weakness but, on balance, it seems a sensible approach and it helps to ensure that the text is accessible to as wide an audience as possible. The author’s writing style also helps with that aim. He is adept at presenting information clearly, weaving together stories about the bird and those who study it that capture the imagination and make reading a pleasure. Together with the many high-quality colour photographs, the result is a captivating book, one that is highly recommended to anyone who wants to know more about this bird.