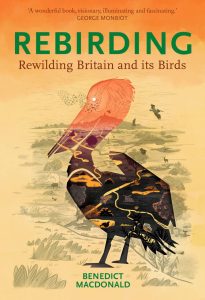 The subject of rewilding has received wide publicity recently, yet not too long ago this concept was familiar to just a handful of enthusiasts. It is the notion of taking large parts of the countryside and letting much of it revert back to what it looked like before either the agricultural or the industrial revolution. To many people this is just a fanciful idea that simply will not happen, because too few people really care about wildlife and because governments will always seek to please the majority and take decisions that reduce our national debt. However, within the rewilding model is an overall message that if we think only on a small scale, we will never manage to maintain habitats that support many of our currently declining bird species.

Benedict Macdonald combines energy and simplicity to create a highly readable text that really does make you want to change things for the better. He starts by explaining how the UK might have looked around one million years ago, long before humans first settled. He goes on to describe the changes that have taken place since – with the climate cooling and warming, sea levels rising by over 100 metres and wildlife coming and going based on the conditions that suited them. But his focus is on how we have shaped the land ourselves and how the largest influence defining the future of our habitats is now the human factor, even though only 6% of the UK is built upon.

He is right to point the finger of blame at us and our ancestors for how we have managed the land, but for me a weakness in his approach is the implied notion that if we could rewild the countryside on a major scale then the birds that have already disappeared will come back. They might – but there are many other factors at play. While there is some recognition in the book of the effects that modern-day climate change is already having on our bird populations, the book’s focus is on land management itself.

Macdonald presents a concise and clearly written account of the state of the nation’s birds. Pulling together the science of the BTO and the practical land management of the RSPB and other conservation bodies, he gives numerous examples of what is being done to help birds – and points the way for us to do a lot more. From the New Forest to the Scottish Highlands there are many case stories highlighted, and some issues benefit from a full chapter – such as the state of our uplands and the conflict between wildlife and the grouse-shooting industry. Many facts are quoted based on research from both the desk and the field, but I do not know whether time was taken to double-check these with the sources. I know that, in the case of the New Forest, no follow-up was made with the main source to confirm the statistics quoted, and some are not correct.

The book’s message is clear. The UK has plenty of open spaces, but many of them (including some National Parks) are poorly managed for wildlife. If we want to change this for the better, then rewilding on a landscape scale is an essential part of the solution. I am sure this is widely understood and accepted by those who work in conservation. However, when dealing with conservation issues, recent governments have demonstrated that they would struggle to organise a party in a party shop, so while there is much to applaud in this book with its ideas and suggestions, the chance of seeing our political leaders picking up any of these seems slim. Meanwhile, all of us should be advocates for bigger thinking and landscape-scale solutions. That is the chief message in this book, both for us as readers and for the wildlife conservation sector in general.