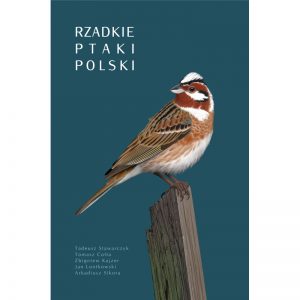 This new book provides a comprehensive review of all the rare birds, both breeding species and vagrants, to have occurred in Poland. It begins with an introduction to the Polish rarities committee and an overview of rare bird recording in the country. Since the book is written in Polish, most of this introductory content escaped me, although some helpful graphs and tables did give an insight into occurrence trends in certain species and the geographical distribution of rarities around the country.

The meat of the book is the detailed species treatments (and it was pleasing to note the full treatment of a number of rare subspecies too). These texts are also in Polish but their standardised and clear format makes it easier to understand the content, as do further graphs and tables, a glossary of terms and a short English summary for each taxon. Although the species order used may be explained in the introduction, I did not recognise it and it departs significantly from that of, for example, the IOC World Bird List. There is also an appendix of ‘species of uncertain origin’, which contains a familiar list of suspects.

Most of the texts are accompanied by a header photograph, always of a Polish occurrence rather than a generic library image. Given this requirement, the standard of photographs is remarkably high, for example the pin-sharp hovering Hawk Owl Surnia ulula and the highly instructive flying Great Grey Shrike Lanius excubitor homeyeri. A few are, understandably, more in the ‘record shot’ category and some are of museum specimens. The cover is adorned with a lovely painting of a male Pine Bunting Emberiza leucocephalos although, interestingly, the artist has chosen to give it distinctly yellowish primary fringes.

As for the vagrants, there are clear parallels with Britain in the significant recent increases in records of Pallid Harrier C. macrourus, Citrine Wagtail Motacilla citreola, Blyth’s Reed Warbler Acrocephalus dumetorum and Yellow-browed Warbler Phylloscopus inornatus. There are also some interesting differences. For example, there are only three records of ‘Black Brant’ Branta bernicla nigricans and six of Fulmar Fulmarus glacialis (all tideline corpses), while there are three records of Scopoli’s Shearwater Calonectris diomedea (but no confirmed Cory’s Shearwaters C. borealis). Considering Poland’s geographical position, the records of Red-eyed Vireo Vireo olivaceus and ‘Greenland Redpoll’ Acanthis flammea rostrata are remarkable. For those seeking clues as to the next addition to the British List, there are some obvious candidates here among the species on the rise. Your money should definitely be on Saker Falcon Falco cherrug, Pygmy Cormorant Microcarbo pygmeus or Great Black-headed Gull I. ichthyaetus.

This is a detailed and authoritative account of rare birds in Poland. Despite the obvious language barrier, it will appeal greatly to all those with an interest in rarities and the ever-changing status and distribution of Palearctic birds.