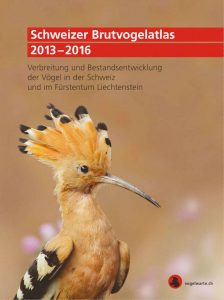 Over four years, more than 2,000 volunteers mapped the bird populations of Switzerland and Liechtenstein and the culmination of their work is published in this comprehensive country atlas. Depending on the species, well-presented maps show density, area or point distributions along with change maps since 1993–96. In a country with such a large range in elevation (193–4,634 m), the atlas makes effective use of ‘altitude charts’ showing the proportion of the population and percentage population change in 100-m bands. The maps are large and perhaps as a consequence the written species texts are highly summarised. With data going back over 60 years, other maps show species distributions in 1950–59 and 1972–76.

The atlas concludes that although the number of species has remained constant between 1993–96 and 2013–16, many breeding species have declining populations and are also experiencing range loss. Themes relevant to groups of species or habitats are interspersed as 46 ‘focus topics’ between the species accounts. The key trends are also picked up in the State of Birds in 2018 recently published by the same organisation – an online English version of which should be available in early 2019.

The book is produced to a particularly high standard and is available in three languages. There are superb photographs atop each species account, so the English names in the headers should be largely redundant to most people. There are no English summaries, and some knowledge of one of the Swiss languages is essential. The species order follows HBW, starting with Common Quail Coturnix coturnix, but an index to English names is fortunately provided in addition to the Romansh and scientific names (as well as the language of the edition).