Richard Porter first raised the issue of deteriorating hearing with age and the possible implications for the results of bird surveys (Brit. Birds 105: 152-153). An editorial comment by AM pointed out that there was little data on the subject, and subsequent correspondence followed (see Brit. Birds 105: 276-277, 684). While it is well known that, in general, the ability to hear high-frequency sounds declines with age, JT began a survey to determine the precise nature of the problem, specifically related to the ability to hear the song of the Goldcrest Regulus regulus as a convenient example.

Respondents to the survey (n=1,056) were not a random sample of the general population. They were birders who replied to the specific question: ‘Can you hear Goldcrest song?’ It is likely that all of them knew the song and were aware of whether they could, or could not, hear it. Respondents were also asked to state their age and gender. Some people suggested why they could no long hear Goldcrests – for example attending (even performing at) too many pop concerts or having had a career in a noisy industry or in the services. Some commented on the effectiveness of various hearing aids. Goldcrest song typically includes frequencies of up to 8 kHz, similar to that of Treecreeper Certhia familiaris and Grasshopper Warbler Locustella naevia, two other species that respondents often referred to as also troublesome. There is an online hearing test at: www.noiseaddicts.com/2009/03/can-you-hear-this-hearing-test

Data were received from 799 men aged from 15 to 90 and 257 women aged from 20 to 84. Age distributions were similar for each sex with the majority of respondents in their 50s and 60s (quartiles 50/60/67 for men and 50/60/66 for women). The proportion of people of each sex and age who could hear Goldcrests was modeled as a binomial variable, which assumes only that all responses were independent. A wide variety of models were compared using Akaike’s Information Criterion. For men, a broken stick (constant followed by decline from a certain age) model gave the best fit, with the break point optimised at age 42. Overall 83% of males (667/799) could hear Goldcrests but this represents 96% for those in their 40s (and younger) declining to 53% in the 80s. For women, no model was found superior to the null (no change with age), even when extreme ages were excluded. Overall 89% (228/257) of females could hear Goldcrests and there is no evidence from this sample of decline with age. Fig. 1 shows the results by five-year age groups and the predictions from the preferred models. The raw data are available in a spreadsheet at www.lanius.org.uk/Goldcrest 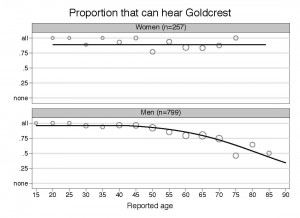 Fig. 1. The proportions of recipients who reported they were able to hear the song of the Goldcrest Regulus regulus, plotted against age in five-year bands. Symbol size reflects numbers of respondents.

In terms of the impact on bird-survey results, the question of whether – or how – to incorporate the issue of age-related hearing loss is quite a complex one. The BTO doesn’t have a full picture of the age-profile of Breeding Bird Survey (BBS) volunteers. The best assessment, albeit based on partial information, is that, over the 20 seasons between 1994 and 2013, the proportion of BBS surveyors in their 30s and 40s has declined, the proportion in their 50s has remained fairly constant, and the proportion in their 60s and 70s has increased.

Is this a cause for concern? That depends on a number of other factors. Firstly, while BBS surveyors are very loyal to the survey, with about 85% retention between years, there is clearly some turnover. If the people who are dropping out are those who are struggling more with their hearing, this would reduce any effect (of the declining ability to hear). Secondly, how many surveyors are countering hearing loss with hearing aids? Thirdly, while the average age of surveyors is increasing, we also know that the proportion of female surveyors is increasing (by about 60% between 1994 and 2013), and the results presented here suggest that this change would lessen the influence of age-related hearing issues to some extent. Finally, the Goldcrest is obviously just one (particularly high-pitched) species among many, and even for a small passerine like this, some individual birds will be detected visually rather than by song, which would also lessen the issue.

Over the period of the BBS, Goldcrests increased in the 1990s, then remained roughly level for a while before declining in the face of several hard winters. The official overall change statistic is a non-significant decline of -9% for the UK across the period from 1995 to 2011 (Risely et al. 2013). The question raised by this survey is to what extent this measure of change might differ if we could remove the effect of age-related hearing loss. This is not something that we are currently able to answer, but our best guess is that the effect would be relatively small, even for the relatively extreme example of the high-pitched Goldcrest.

From the 2014 breeding season onwards, volunteers will have the option to submit additional information on whether they detected birds by song, call or visually while doing their BBS visits. This should help us to understand better the issues relating to differential detectability.

We are very grateful to everyone who helped to circulate and replied to the survey.