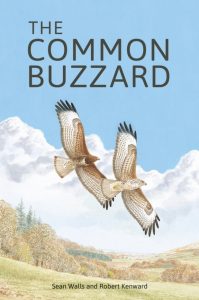 By Sean Walls and Robert Kenward

The Common Buzzard Buteo buteo is a success story. It is an adaptable bird with a varied, flexible diet and, as persecution has become less of a problem, it has been able to take full advantage of our modern landscapes. It is Britain’s most abundant raptor and although it may lose its crown in future to the Red Kite Milvus milvus, for now it is streets ahead. Here in pastoral mid Devon, I see perhaps five times as many Buzzards as all the other raptors put together.

Sean Walls and Robert Kenward were involved in pioneering work studying Buzzard home ranges, dispersal and survival in Dorset in the 1990s, based on radio-tracking a large number of birds over many years. Despite considerable improvements in tracking technology, their work remains highly relevant today and forms the heart of this book. The research of others is also brought together, including a number of long-running studies from across Britain, making this a comprehensive and well-rounded book.

Both of the authors have flown Buzzards as falconers and whatever your views about holding raptors in captivity, this hands-on experience helps to shed light on aspects of behaviour that are difficult to get to grips with in the wild. It helps to inform an excellent chapter on hunting, which provides real insight into how this bird operates when searching for food. There are plenty of surprises, which may give you food for thought next time you see a bird perched, apparently dozing, on a roadside post, or strutting across a damp field early in the morning.

The final chapter is about human relationships with the Buzzard, including its unexpected role in the long-running conflict between driven grouse shooting and raptors at Langholm, in southern Scotland. As many as 60 birds were found to be hunting over the moor, adding to the loss of grouse taken by other raptors. Buzzards have also come into conflict with lowland Common Pheasant Phasianus colchicus shoots and this issue is explored in detail too. The Buzzard’s success has not come without problems in our densely populated and heavily exploited country. Many readers will disagree with the authors’ views on these issues but they are well articulated and certainly worth reading. Ultimately, they are a plea for compromise based on sound science, in a debate where entrenched, highly polarised views have tended to dominate.

The book is eminently readable, despite the level of detail provided, and makes good use of figures, line-drawings and photographs. The key ‘take-home’ points are presented at the end of each chapter, providing a useful overview to return to or a means of deciding which chapters merit closer scrutiny.

This is book number 100 in the long-running Poyser series and the first to be offered in a new softback format, with an attractive card cover (by Alan Harris) and a snugger fit in the hand. Purists will be relieved to learn that it is also available in hardback with the familiar white dust jacket, though they will have to part with an extra £25 in order to stick with tradition. This is, then, a landmark volume for the Poyser series, and the authors have made sure that this is one of the best of the recent additions to the series.