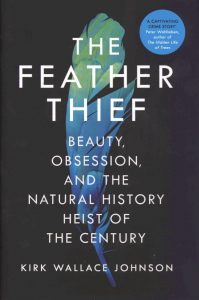 Late in the evening of 23rd June 2009, a 20-year-old American, Edwin Rist, broke into the Natural History Museum at Tring and stole 299 bird skins, among them 39 of Resplendent Quetzals Pharomachrus mocinno, 37 of King Bird-of-paradise Cicinnurus regius and 82 of assorted cotingas – including ten of the endangered Banded Cotinga Cotinga maculata. This young man, a highly gifted flautist studying at the Royal Academy of Music in London, had pulled off what the book’s subtitle calls ‘the natural history heist of the century’. It transpired that he had another expertise too: he was an accomplished fly-tier…

He was duly tracked down, arrested and successfully prosecuted, only to claim in his defence Asperger’s Syndrome and get away with a suspended 12-month sentence. The whole affair attracted surprisingly little publicity and, perhaps, without this book (first published in hardback in 2018) most of us would probably still know very little about what happened, or why. What drove Rist to commit what, on the face of it, seemed a bizarre crime?

Another American, Kirk Johnson, previously deeply engaged in welfare work in the Middle East, was fly-fishing in New Mexico when he first heard the story. Astonished and intrigued, he tracked down and interviewed Rist, discovered that Rist had an accomplice in Norway (who had effectively ‘fenced’ much of the stolen material), and contacted various other people involved. As well as trying to understand what lay behind the whole affair, he sought to discover the whereabouts of the stolen birds. Johnson’s amazing detective story, with its subterfuges, dodgy characters and still-lingering doubts and mysteries, takes up around half of this paperback edition: it is compelling stuff.

Much of the rest of the book explores the ‘why’ in all of this. These stolen birds, rarities or from remote places – or both – are a source of colourful, beautiful and highly desirable feathers, of interest to people who tie salmon flies. This is perhaps best described as a highly skilful, if rather dubious form of fine art, which seems to have little to do with the actual practice of salmon fishing. Fly-tying had its origins and heyday in Victorian Britain, but has evidently had something of a revival more recently. Johnson not only tells its intriguing story, but also introduces us to a selection of aficionados, whose attitudes range from honesty to distinct shiftiness (and who reminded me to some extent of egg-collectors). I often felt annoyed and frustrated as I read about them – but it was hard to put the book down.

Both the importance of our national collection and the impact of this robbery on it are sensitively and well evaluated. Much is said about the origins of the stolen birds, with particular reference to those brought back from southeast Asia by Alfred Russell Wallace, whose exploits merit a chapter of their own. We birders and ornithologists may instinctively understand most of the nuances of this side of the story, but others (including Kirk Johnson himself when his investigations began) would not, so balancing the account in this way seems sensible.

It seems odd to be recommending a paperback containing a complicated detective story in the pages of BB – but I do so without hesitation. Read it yourselves, enjoy it and learn from it!