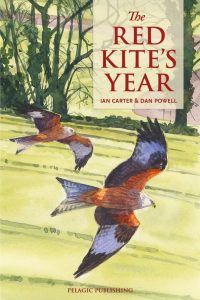 By Ian Carter and Dan Powell

This is an extremely attractive monograph. It comprises 16 main chapters, 12 of which cover the Red Kite Milvus milvus through the ups and downs of the months of the year, from the rigours of raising young during the warm summer months to the struggle for survival in the depths of winter. These are augmented by four chapters on other topics interspersed through the book.

The first of these, entitled ‘History in Britain’, describes how the species was protected in the fifteenth century in recognition of its street-cleaning role but started a downward spiral from the 1700s as improved sanitation in urban areas reduced feeding opportunities and persecution increased in the countryside. By the end of the nineteenth century only a few pairs remained in a remote part of Wales. Numbers there reached their low point in the 1930s but, with protection, a (very) slow recovery commenced. The chapter goes on to explain how the Welsh population was helped to increase from around 30 pairs in 1980 to 60 in 1990.

‘The Red Kite reintroduction programme’ gives a detailed account of the project in which Ian Carter was closely involved. Red Kites have been reintroduced to several parts of England, Scotland and Ireland but levels of success have varied. Spectacular expansion has occurred in southern England, with 4,000+ pairs now estimated, but persecution through shooting and poisoning continues to hamper projects in other areas.

The third chapter, ‘Threats and problems’, addresses these issues and others that confront the species, including accidental poisoning, egg-collecting and collisions with power lines. ‘To feed or not to feed’ describes the benefits of feeding stations in remote areas where natural food may be short and also discusses the pros and cons of providing food in urban gardens in towns such as Reading.

A major feature of the book which adds greatly to its appeal is Dan Powell’s portfolio of evocative illustrations of Red Kites. His paintings and sketches depict them in a wide variety of habitats including the downs of his Hampshire home, the Chilterns and areas farther afield. All are annotated with Dan’s detailed captions, which complement them so well.

While not a detailed scientific appraisal of the reintroduction of the Red Kite, this book does provide a very readable account of one of the most successful conservation projects ever attempted in the UK. It is highly recommended for all aficionados of this charismatic raptor, which is now well established in many areas of the UK and hopefully will soon become a regular sight throughout these islands.