Abstract The record of a Slender-billed Curlew Numenius tenuirostris at Druridge Bay, Northumberland, on 4th-7th May 1998, was recently reviewed by BBRC and BOURC. Both committees, on split decisions, found the identification to be Not Proven and hence the record is no longer acceptable. As a result, Slender-billed Curlew has been removed from the British List. This paper gives the background to the decision and summarises the review process. The bird showed plumage and structural features that were consistent with Slender-billed Curlew. However, several aspects of the descriptions and the photographic and video evidence assessed were considered insufficiently robust to secure the identification of this critically endangered, probably now extinct, bird as a first and thus potentially only record for Britain.

To read the article in full, order a back issue from our online shop or subscribe now 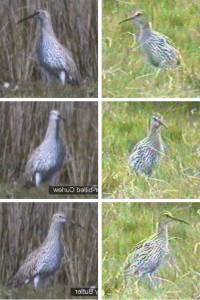 Direct comparison of the (first-summer) Druridge Bay curlew (right panels) with an adult Slender-billed Curlew from Morocco (left panels). Videograbs were taken of birds in poses that were as near identical as possible, and demonstrate the strong similarity. Note that the images have been scaled so that the Druridge Bay bird and Slender-billed Curlews appear the same size, whereas they may not have been the same size in life. The top-right panel, middle-left and bottom-left, have been mirror-image reversed. Photographs of the Druridge bird by Justin Carr and Trevor Charlton, Moroccan birds by Andy Butler.