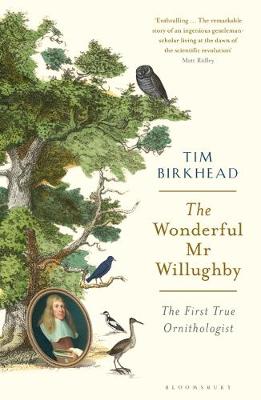 Most birders will have heard of Frances Willughby through his association with John Ray and their joint publication Ornithology. Some may know that he had an association with Wollaton Hall, on the outskirts of Nottingham. A few may even know that this book was but one part of a trilogy, with subsequent volumes on fishes and ‘insects’ – the latter including many invertebrates beside true insects. Although much of the underlying research for Ornithologywas undertaken by Willughby, his death in 1672 at the early age of 36 meant that his friend and colleague John Ray wrote most of the book. The original Latin edition was published in 1676, swiftly followed by an English version in 1678; Historia Pisciumand Historia Insectorumappeared in 1686 and 1710, the latter six years after Ray himself had died.

The present book is a thorough and comprehensive account of Willughby’s life and work, especially as this relates to the Ornithology. The opening chapters describe his travels through Britain and then across Europe, and are based largely on the journals of his companions, since many of his own letters and documents have been lost. On these journeys, they met many of the leading biologists/naturalists of the time, and Willughby amassed a collection of paintings and sketches, many of which featured in the Ornithology.

Tim Birkhead has a deep interest in the history of scientific thought and has clearly spent a great deal of time ferreting through the notes and journals of Willughby’s close companions, as well as his own collected specimens. At one point, he describes his excitement at being shown a 17-drawer cabinet, still present in the family home, containing bird eggs, mollusc shells, plant seeds and so much more – many labelled in Willughby’s own writing.

Tim shows that one aim of the Ornithologywas to document how the various birds were related to each other. This was effectively an early attempt at systematics, although bear in mind that this was some 200 years before evolution was to become accepted and Ray (at least) thought that they were cataloguing God’s creative wisdom. Nevertheless, careful dissection of specimens and comparison of the results show how Willughby was a pioneer in the scientific study of birds and their relationships.

Apparently, researching this book took ten years. I can believe it! Written in a commanding yet lucid style, it chronicles the wide range of interests of one of Britain’s great early scientists whose interests encompassed not just birds, but fish, invertebrates, astronomy and even games. There is far too much in this book to even attempt a summary; it is a masterly review of one of our nation’s earliest scientists that closes with a compelling claim that Willughby was the first to recognise the European Honey-buzzard Pernis apivorusas a distinct species. As BBreaders will already know, Tim has suggested that, since its range extends beyond Europe and it doesn’t eat honey, its English name is rather inappropriate, and he recommends that it should be renamed ‘Willughby’s Buzzard’ (Brit. Birds110: 698–700). Over to you BOU – or should it be IOC?