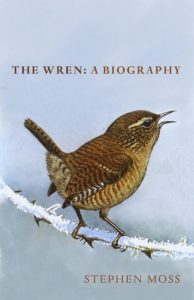 I promise I am not in the pay of Stephen Moss, but once again I find myself saying that he has produced a remarkably good, beautifully written and absolutely fascinating little book. Every birder, whatever his interests, should read it, enjoy it and learn from it.

It is not a traditional monograph, but rather an affectionate account of the life and times of our most common bird, the Wren Troglodytes troglodytes. Over 60 years ago, the true monograph, one of the most celebrated in the famous New Naturalist series, was written by Edward Armstrong: Stephen Moss stands unashamedly on the great man’s shoulders in presenting the ‘ornithology’ of the bird, while blending in an impressive amount of what more has been learnt about it in the recent past. Not surprisingly for this author, the whole story is liberally mixed with folklore, history and literary references, which in my view adds greatly to its appeal.

The format is a 12-chapter, month-by-month examination of how Wrens live, and as I followed the tale countless personal memories popped up – how many times impertinent Wrens somehow got back past me as I drove the Heligoland traps on the Isle of May; the poor, hungry bird I caught by hand as it emerged from under a tuft in a snow-covered field; and one of a recently fledged brood that came out of a bush, landed on the front of my jacket and thoroughly explored me before moving on. I thought too how often, as I worked the coastal undergrowth for small autumn migrants, I cursed because the bird I had spotted turned out to be just another Wren… A thoroughly undeserved notion: the Wren, surely, has to be one of the best-loved of birds. While enjoying the section on island races, I recalled my huge pleasure when I finally saw my first St Kilda Wren T. t. hirtensis – and a conversation I overheard in a hide, a few years later, when a birder remarked that he too had just seen his first, only to be told by someone: ‘Oh, but you can’t count it, it’s only a subspecies…’ How sad, when such a super little bird is no more than a tick on a list.

Stephen has done Jenny Wren justice here not just in his text but in including a quite remarkable selection of illustrations, almost all of them artwork of some form or other. There is probably no collection of Wren pictures anywhere quite like this. There is a picture index, giving source details for each, but unfortunately the artist is not always mentioned. Richard Richardson, for instance, gets no credit for his illustration from the old ‘Fitter’ pocket guide to nests and eggs – which, also unfortunately, is badly misdated at 1904!

It is always disappointing when small errors and omissions mar an otherwise excellent book, so I am pleased to say I found hardly any others. I must point out, though, that being born in 1900, Edward Armstrong entered the world in the last year of the nineteenth century and not the first year of the twentieth. As I know I have remarked before, this is the sort of thing a good editor or proofreader should pick up.