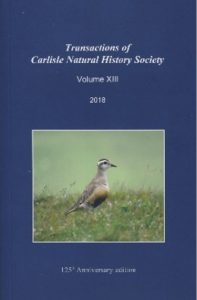 The latest in a series of occasional publications produced by Carlisle Natural History Society is a collection of four articles relevant to the ornithological history of Cumbria. In an era of declining membership of bird clubs and societies, it is refreshing to read of this organisation’s strength to mark its 125th anniversary in this way. Transactions of the CNHS are published at approximately ten-year intervals as suitable papers come forward from members. Material partly derives from valuable collections housed within the Tullie House Museum and Carlisle Museum. Four well-researched and eminently readable papers are included in this edition:

The Dotterel paper is written by two fellow Dotterel enthusiasts, describing the history and status of this enigmatic plover in Cumbria since the eighteenth century. Lakeland and the Cumbrian section of the northern Pennines possess both traditional stopover passage sites and the only significant breeding records in the UK outside Scotland. While methods used by countrymen in those early centuries are now frowned upon, eggs and skins acquired by local museums do at least provide valuable reference collections. The authors name this period of history as the ‘acquisitive period 1784–1956’ when many more clutches and skins must have been taken from the Cumbrian fells than have been recorded. Some 131 confirmed breeding records were made by collectors in the period, but detail is often lacking. The authors recognise that acquiring eggs from this rare breeding bird in England was the primary motive for study.

Then followed the ‘inquisitive period 1957–2016’ when committed naturalists went about gaining a true understanding of the Dotterel’s status and breeding biology. There are 54 confirmed breeding records in the 1959–1994 period, after which reduced observer activity brought only a single breeding record, in 2016. Contributions from the two authors and the celebrated naturalist Derek Ratcliffe over the last 50 years are notable. These form an important historical record of the only true arctic-alpine species nesting in England. A decline in the occurrence of Dotterels in Cumbria in the last 20 years is thought to be genuine, accompanied by a shift from Lakeland fells onto the northern Pennines. Suggested reasons are given. Recognising modern-day pressures at all the Cumbrian sites, as well as the species’ ‘edge of range’ status, may indicate that the heyday of this English breeder has gone.

Two other excellent papers describe how Pink-footed Geese use the south Solway marshes and farmland, describing past, current and likely future pressures as well as interaction with Barnacle Geese Branta leucopsis, and how numbers of Reed Warbler, a species gaining ground in Cumbria, have fluctuated in suitable habitat at Bassenthwaite Lake. Finally, there is an excellent example of the value of interrogating archive collections, relating to the work of over 40 Lakeland taxidermists.