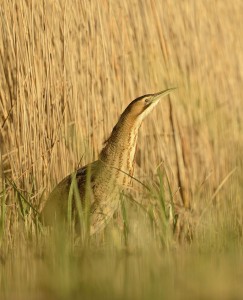 The Bittern is bouncing back to full recovery. This year, the foghorn-like booming song of over 150 males has been recorded in England and Wales, making it an exceptional year in recent history, numbers not thought to have been surpassed since early in the nineteenth century.

Bittern numbers peaked at around 80 booming males in the 1950s, but had declined to only 11 booming males in England in 1997. Concern over a second UK extinction led to a concerted conservation program, which is driving the current recovery. The Bittern was absent from the UK as a breeding bird between the 1870s and 1911.

During the breeding season, Bitterns prefer sizeable tracts of wet reedbed – a habitat which, two decades ago, had become scarce and under-managed in the UK.

Simon Wotton, an RSPB conservation scientist, said: ‘In the late 1990s, the Bittern was heading towards a second extinction in the UK, largely because its preferred habitat – wet reedbed – was drying out and required intensive management, restoration and habitat recreation. But thanks to efforts to improve the habitat, combined with significant funding from two projects under the EU Life Program, the Bittern was saved, and we’re delighted that its success keeps going from strength to strength.â€

Martin Harper, RSPB conservation director, added: ‘The Bittern is a species which proves that conservation can be successful, especially when you can identify the reason behind its decline and bring in measures and funding to aid its recovery.’

Over the last 25 years there have been several significant habitat-restoration projects, some of which are now RSPB nature reserves, including:

·         Lakenheath, in Suffolk. This wetland site was converted from carrot fields from 1995. Bitterns were first recorded booming here in 2006 and the first confirmed nesting was recorded in 2009.  This year six booming males were recorded on site.

·         Ouse Fen, in Cambridgeshire. This partnership project with Hanson has seen wetland creation former mineral workings, which started around 10 years ago.  In time, it will be the largest reedbed in the UK. The first confirmed booming was in 2012, with ten recorded in 2015. 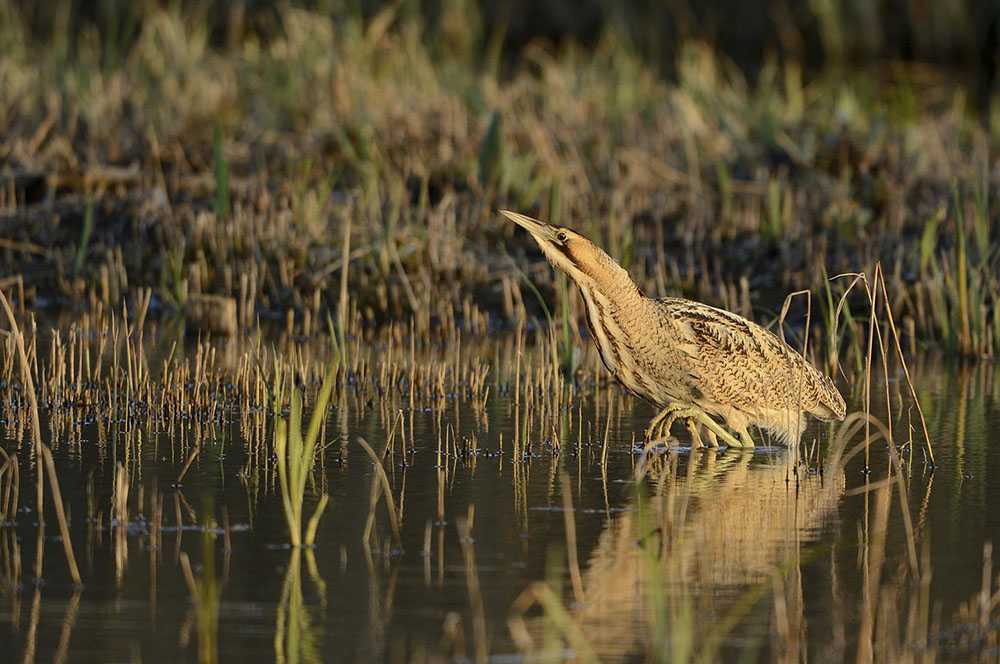 According to this year’s figures, the top UK county for Bitterns is Somerset, with over 40 booming males. Following the restoration and extensive creation of large wetlands in the Avalon Marshes, at Ham Wall (RSPB), Shapwick Heath (Natural England) and Westhay Moor (Somerset Wildlife Trust), Bitterns became re-established in Somerset in 2008.

East Anglia remains the Bittern’s regional stronghold (with over 80 booming males), particularly in traditional sites on the Suffolk coast, and in the Norfolk Broads but also increasingly in the Fens, particularly at newly-created habitat.

Some 59% of booming males are on sites protected under international law, namely the EU Birds and Habitat’s Directives. These sites, referred to as Special Protection Areas or Special Areas of Conservation, are collectively known as Natura 2000 sites.

Martin Harper said: ‘These sites have been vital to the conservation of the Bittern and other key species in the UK. However, the EU is consulting on the future of the Birds and Habitats Directives. And we fear this may lead to a weakening of the directives, with potentially disastrous consequences for many threatened species.’

The RSPB is working in partnership with a range of organisations across Europe and across the UK which are encouraging people to take part in a European Commission-led consultation on the Birds and Habitats Directives. Click https://www.rspb.org.uk/joinandhelp/campaignwithus/defendnature/ for more information.