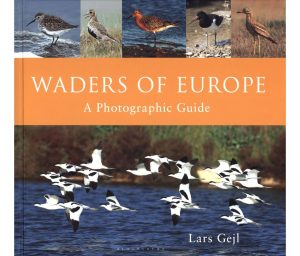 This large-format volume covers 44 species of waders, or shorebirds, that occur regularly in Europe plus a further 38 species from North America and Asia that have occurred as scarce visitors or vagrants. Extensive introductory material discusses various aspects of the life history of these birds but the bulk of the book is made up of the individual species accounts, which are lavishly illustrated with numerous high-quality images. For each species, details are given of the breeding biology, migration, population size, habitat, voice and range, though no maps are included. There is a particular emphasis on identification, including of subspecies, but identification of the more troublesome species is sometimes dealt with rather superficially, and some quite well-established identification features are not mentioned, such as the loral pattern of Semipalmated Plover Charadrius semipalmatus or the flank pattern of the nominate race of Lesser Sand Plover C. mongolus.

There is regularly a sense that something has either been lost in translation or editing standards leave much to be desired. For example, an annotation dealing with the upperpart pattern of a juvenile Marsh Sandpiper Tringa stagnatilis reads: ‘The whitish varies along the edge of the greyish-brown feathers of the upperparts may be coarsely serrated or anything in between, as here’, which is close to gibberish, as is the description of the upperwing pattern of Great Snipe Gallinago media, which reads: ‘the dark upperside displays a distinct, pale wing-bar, along the greater wing-coverts and two more, constituted by the secondary and tertiary wing-coverts’. Sadly, these are not isolated examples. On more than one occasion the subheading ‘Habitat’ is replaced by ‘Distribution’, which then appears twice. The quality of the images is the chief saving grace as they really are an outstanding collection, but the claim on the back cover that this is ‘the ultimate guide to wader identification, ecology and biology’ is frankly a stretch.