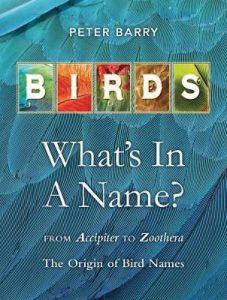 This is an attractive little book, copiously and nicely illustrated, and written in a cheerful and informal style. It sets out to explain the binomial system we use to name birds, and then to translate and explain scientific names and, to a lesser extent, their vernacular counterparts. Unfortunately, it rather falls down on these aims.

The origins of the binomial system are only sketchily described, but what is more important is an inadequate explanation of the rules which apply and how these work. We are left to infer rather a lot from the general text, which, incidentally, sometimes makes the common mistake of calling the second word of the scientific name the ‘species name’ – properly, this is, of course, the first and second words taken together.

The birds are treated alphabetically by genus, largely a selection of British and European species, plus a scatter of birds from other parts of the world. The explanation of the scientific name is usually accompanied by comments on the vernacular name and, in many cases, other widely assorted titbits of information. There are also a number of box features. Broadly speaking, the translations seem adequate, if sometimes rather loosely explained, but the quality of the rest is very variable. I spotted very few serious errors (one, however, being the comment that the Scottish Crossbill Loxia scotica is currently given only subspecies status, which seemed strange coming from an Aberdeen-based author!), but there were times when things were unclear or rather dubious.

With more rigorous editing and/or a friendly ‘peer reviewer’, this could have been a much better book, especially if more attention had been given to the names and less to the general bird information. It seems a great pity that it falls short, given that any profits from sales will go to a very worthwhile charity for disabled children.