There are no formal judging criteria – instead, the judges are simply looking for books of special merit that will be appreciated widely by British Birds readers and BTO members. Details of the most recent winner can be found below.

A total of 65 books were reviewed by British Birds and/or BTO during the year, and a whopping 34 of those made the initial shortlist and were available to look through on the day of judging. Once again, the judging panel, made up of three representatives from BTO and three from BB, gathered at the BTO annual conference at Swanwick, in early December 2018. That such a large collection of books made it to Swanwick, in the back of one of the BTO cars, suggested an unusually open competition. That was confirmed when, at the end of the afternoon session, we sat back to survey the unusually large number of books that had gained one or more points in the final round of voting. Counter-intuitively, perhaps, there was a standout winner (no fewer than five of the six judges placed it at the top of their selection), but beyond our winner, the judges’ opinions and votes were widely spread, with relatively little agreement amongst us, reflecting our different interests and priorities and not least the inherent difficulty in deciding what, exactly, makes a book a contender for this award. There was no clear theme for this year’s top-rated titles, although all of the first five could perhaps be classed as primarily factual rather than literary offerings. 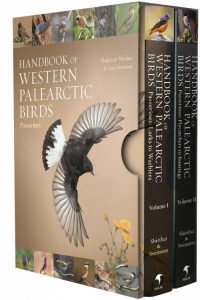 By Hadoram Shirihai and Lars Svensson; Bloomsbury, 2018; reviewed in BB by Martin Collinson and Stephen Menzie (Brit. Birds 111: 629–632) and for BTO by John Marchant.

This is a big book in every sense. You realise that you have a serious piece of work on your hands when the two volumes arrive on the doormat in a sleeve. This book, co-authored by two juggernauts of Western Palearctic ornithology, has been eagerly awaited for many, many years, and it will more or less sell itself to the majority of Europe’s keen birders (and ringers), at least those who have an interest in bird identification. There are more than 5,000 photographs and 400 maps, and the text is an authoritative summary of the identification, moult and taxonomy of the region’s passerines. Despite the long gestation period, we felt that it is destined to remain a standard-bearer well into the future.

Given the limited portability of the paper copies (the two volumes weigh getting on for 6 kg), the digital format of HWPB has to be a serious consideration for most birders. This is one book you’d want to take on any Palearctic birding trip, and having it on a smartphone, tablet or laptop is an ideal solution. The phenomenal amount of content in the paper copies inevitably means that the layout is a little cramped and some of the photos are a bit small but the electronic version enables you to view the figures and photos full size, and this means that you can appreciate and enjoy the content that much more easily. The paper vs digital debate is not going to be won or lost by either side in the near future, but for a work like this the option of a digital format is a significant step forward for anyone birding away from home. 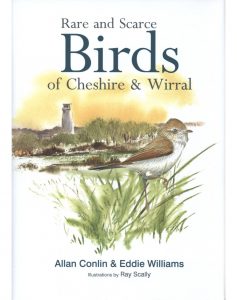 This is a book that four of the six judges gave points to in the final reckoning, and it was highly regarded for being a particularly good example of the genre. The ‘finders accounts’ add so much to a systematic list of birds and really bring to life the enjoyment of finding and seeing rare and scarce species. The figures are presented in an easily digestible format, turning what could have been a rather dry systematic list into something attractive and compelling. Its layout and artwork in particular contribute to a beautifully produced little book that will be well thumbed by local birders and visitors to the birding county of Cheshire & Wirral for many years to come. It sets a high standard for a book of this kind. 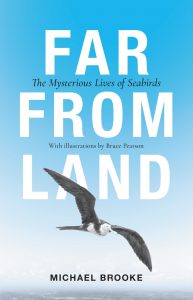 3rd= Far from Land: the mysterious lives of seabirds

By Michael Brooke; Princeton University Press, 2018; reviewed in BB by Martin Heubeck (Brit. Birds 111: 411) and for BTO by Ruth Walker.

There are very few, if any, birdwatchers who do not get excited by seabirds at some point. Even the most landlocked patch-watchers and garden birders get to the coast occasionally – and whether it is Fulmars Fulmarus glacialis at Hunstanton, Northern Gannets Morus bassanus at Bempton, Puffins Fratercula arctica on the Farnes or Manx Shearwaters Puffinus puffinus on Skomer, seabirds will stir your senses. If you are interested in what seabirds do and why they do it, as opposed to simply what they look like, this book should be high on your list. It is primarily a tour of what modern technology and our increasing ability to track birds throughout the year can tell us about the lives of seabirds when they are far from land – which is most of the time for many species. Not surprisingly, there are many references to the OxNav group, which is headed by Tim Guilford, who reveals many of the secrets of the shearwater’s world elsewhere in this issue (Brit. Birds 112: 9–25), and Mike Brooke has presented an extremely readable summary of the progress of modern seabird researchers. 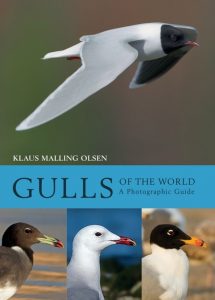 3rd= Gulls of the World: a photographic guide

Is there space on your shelf for another book on gulls? Some birders live to see gulls but for the rest of us, what does this guide offer that others have not? Brian Small’s review is a good place to start if you think that this could potentially be the book that finally persuades you to spend all your winter birding hours at the dump… In terms of this award, the judges felt that it is, perhaps, the single best all-round book on gulls currently available. With reference to the earlier discussion of paper vs digital, this one is reasonably portable in terms of living in the car (or perhaps a rucksack) for day-to-day reference in the field. The trickier taxa are treated pretty thoroughly but – given the complexity of the subject – it’s unlikely to provide the answer to every single odd-looking gull you encounter. The in-depth treatment from online sources such as www.gull-research.org will be needed for that. Klaus Malling Olsen has an ability to explain difficult subject matter with a remarkable clarity and simplicity; it makes any one of his exceptional bird books a serious consideration for any birder’s collection. 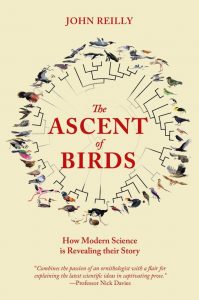 5th The Ascent of Birds

Both BTO and BB reviewers, respectively Rob Robinson and Martin Collinson, extolled the virtues of this book; the former summarised it as ranking ‘among the best popular science books and provides a great guide to our current understanding of where, and how, birds evolved.’ It traces what modern scientific studies can tell us about the key events in evolution and biogeography of the birds that we see around us today – and surely every birder will find chapters of particular interest. It’s all too easy for birdwatchers to get morbidly depressed about the current state of our environment, about climate change, the loss of species and habitats and various other aspects of humans trashing our planet. On the other hand, scientific endeavour and research is continuing to open doors and our eyes to aspects of the natural world that we know little or nothing about. This book, along with Far From Land above, falls neatly into the category of the sort of book that is worth every BB reader and BTO member spending some time with before the dark nights of winter give way to spring.

As always we are grateful to the BTO for making facilities available for judging at Swanwick, and especially to Carole Showell for sourcing books from the Chris Mead Library at Thetford.