In November 2019, I arrived at St Peter’s School in York and, still in the lobby and with the hood of my very wet coat over my head, was pounced upon by Tim Birkhead, the outgoing Chair of New Networks for Nature, who asked me if I would be prepared to join its Steering Committee. Only when I had reached the sanctuary of the cloakroom did it occur to me that Tim may have spent the morning accosting everyone who walked through that door, and that I had been the first to say yes. By the end of that year’s three-day event, he had given me my first job to do – writing this editorial.

One reason for being unable to refuse either request is that year after year the New Networks for Nature gathering is an unfailing wellspring of inspiration and optimism. In my professional sector, wildlife conservation, some years can reach their close with reserves of inspiration and optimism stretched, with just enough in the tank to keep alive faith in the success that is forever round the next corner. It felt like just such a year in 2019.

I had been to a few of the 11 annual events that have taken place to date and realised how well ‘New Networks for Nature’ encapsulates what the organisation is. Foremost, it is for nature. It is not a network, but many. New networks. They were new in 2008 and are getting newer every year. 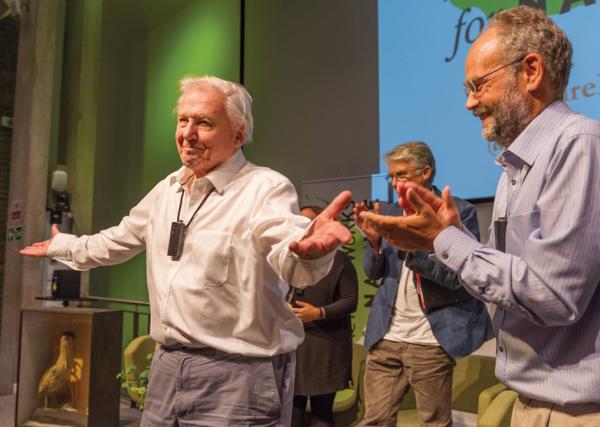 New Networks grew out of a series of occasional collaborations between artists and scientists that John Fanshawe had been organising at BirdLife International, in Cambridge. Some of the speakers and audience members, people like Tim Birkhead, Mark Cocker and Jeremy Mynott, would keep the discussions going well after the events had officially ended. Gradually, an idea crystallised around their shared sense that, as Mynott put it, ‘wildlife had a far richer role to play in the human experience than that defined by science or economics alone.’ Could they rope in a wider group of people to explore the implications of that idea?

In December 2009, the idea had turned into a one-day event in Oxford’s School of Geography and the Environment, which was attended by 44 participants. The majority were, like the original founders, ornithologists or bird-inspired artists. Before the day ended, there was a unanimous wish to do it again the following year, and by 2011 it had become an organisation with a name and a logo (designed by artist and early collaborator Carry Ackroyd). New Networks has always run on the voluntary efforts of its small team, but the BTO’s Chief Executive, Andy Clements, readily saw a case for assigning some BTO staff time – in the shape of Mike Toms – to provide organising capacity and technical support.

Over the following years, New Networks expanded into its now-familiar three-day format, grew its audience to over 150, extended its themes to include all wildlife and to tackling conservation issues with a sharper political edge to them. The most marked expansion, though, has been in the range of ways its contributors engage with the natural world and then share their love for it. This is helped by – in 2019 especially – good gender balance and improving general diversity. There is now no awkwardness in programmes that might have a poetry reading immediately after a presentation of cutting-edge science, to be followed in turn by a panel discussion on children’s literature or a real-time bulletin from the Extinction Rebellion front line. For three days, the boundaries between disciplines are abolished by tacit consensus.

But a comfortable retreat from the heat and thrust of fiery debate it is not. Many regulars point to a session titled ‘The Value of Nature’ in 2015 as an all-time highlight, in which Tony Juniper and George Monbiot matched each other’s arguments and passion in a heavyweight bout that was eventually declared a draw after 12 rounds. 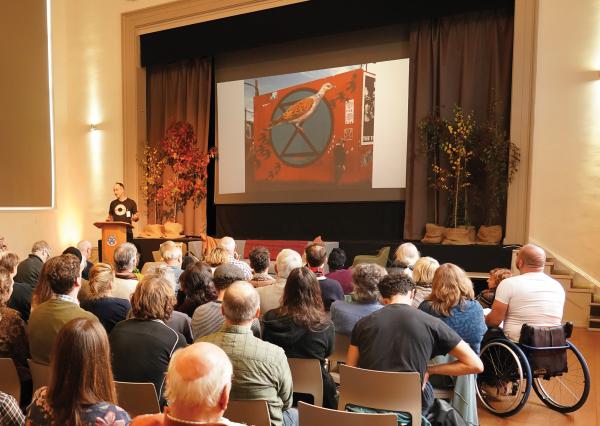 The event has been going long enough for a few traditions to have emerged. The speakers and performers who open and close the events are often drawn from celebrity ranks, and have included venerable figures like Ronald Blythe and Richard Mabey, high-profile naturalists/conservationists such as Adam Nicolson, Chris Packham and Tim Smit, and entertainment-industry stars with a passion for nature such as Germaine Greer and, most recently, Feargal Sharkey. Memorably in 2016, Sir David Attenborough’s passionate and moving address was a highlight for all.

There are as many reasons to take part, whether from the stage or in the audience, as there are attendees. Jeremy Mynott again: ‘We need to defend and celebrate nature as a crucial part of our identity and cultural heritage. We continue to affirm that nature is at the heart of human flourishing and that the distinctive blend of art and science we have encouraged is the best and perhaps only way to appreciate its full richness and complexity.’ Well said, and if re-expressed from my own professional perspective, then understanding the cultural underpinning of our relationship with the rest of nature is the only way to overcome the cultural blockages standing in the way of our planet’s survival. Our conventional conservation model, built around technocratic components of law, policy, science and management practice, contains ingredients that are necessary for success but have proved insufficient in themselves. New Networks is part of the search for cultural renaissance – a complex new ecology, an internet of all living things, in which humanity and the rest of nature are restored to a mutually beneficial coexistence.

For more information on New Networks for Nature, including previous and forthcoming events and details of past presenters, see our website: newnetworksfornature.org.uk You can also sign up there for our newsletter and to receive details of events. Find us on Twitter @networks4nature

Laurence Rose has been birding for over 50 years, has worked for the RSPB since 1983, and is an author, composer and artistic collaborator. @LaurenceR_write