Ask anyone why Common Guillemot Uria aalge eggs are so pointed at one end (a shape referred to as ‘pyriform’ – like a pear) and the usual answer (until recently) is that this shape allows them to either spin like a top or roll in an arc, rather than off the cliff ledge on which they are laid and incubated.

In a paper published in BB in 2017, I provided some historical background to these two popular ideas (Birkhead 2017). I also pointed out that the evidence for both ideas is slim at best. The spinning idea is based on studies using empty, blown eggshells and is not relevant to real eggs. In terms of the rolling-in-an-arc hypothesis, a cone-shaped structure (like a pyriform egg) will certainly roll in an arc on a smooth and gently sloping surface. However, extensive tests involving rolling real Common Guillemot eggs on real guillemot ledges failed to find any evidence that they were any less likely to roll off the ledge than the much more ‘elliptical’ (and less pointed) egg of the Razorbill Alca torda (Ingold 1980).

Folklore and fake news die slowly, however, and a recent study resurrected the rolling-in-an-arc hypothesis (Hays & Hauber 2018). Yet there are two important reasons why rolling in an arc is not the explanation for why guillemot eggs are pyriform in shape (Birkhead et al. 2018b). First, the arc described by a rolling guillemot egg on a smooth surface is much greater than the width of many guillemot breeding ledges; and those ledges are rarely smooth. Second, guillemots usually incubate facing the cliff wall and orientate their egg between (not on) their legs with the blunt end of the egg closest to the cliff face. Thus, if the egg were to roll, it would roll outwards towards the cliff edge rather than inwards (and to safety). If the guillemot’s egg shape was an adaptation to prevent it from rolling off the ledge, incubating birds would position the egg the other way round.

Since the rolling-in-an-arc hypothesis doesn’t explain the pyriform shape of a guillemot’s egg, we needed some new ideas. Having studied guillemots for many years, I could think of two unique features of their biology that might be important. The first was the vulnerability of eggs to breakage resulting from an impact, for example from a guillemot crash-landing at the colony – as they often do – on top of an incubating bird. The second was ‘dirt’. Guillemots breed at high densities and defecate with no regard for their neighbours; their breeding ledges are filthy places. It is not uncommon for guillemot eggs to be partially or sometimes completely, covered in muck during the course of incubation.

Perhaps the pyriform shape of the egg makes it less vulnerable to breakage following an impact? This could work if the forces of an impact are dissipated over a greater area of egg in contact with the cliff ledge, hence minimising the risk of breakage. In terms of ‘muck’, a pyriform shape confers some protection because of the way the egg rests on the ledge: most muck is confined to the pointed half of the egg, leaving the blunt end, from which the chick hatches, relatively clean. Razorbills, which often breed on the same ledges as guillemots but always alone, rarely have their eggs contaminated with faecal material (Birkhead 2017; Birkhead et al. 2017).

Two feasible ideas, but difficult to test rigorously – and ethically. And I wasn’t entirely convinced that either of those ‘selective forces’ was sufficient to explain the shape of a guillemot’s egg, and said so at the end of the paper (Birkhead 2017). But then, during the 2017 field season, while on a Common Guillemot ledge with my colleague Jamie Thompson, I had the idea that a guillemot egg would stay put on a sloping ledge. I tried it and it did: the slope was 30°. I was surprised. I tried placing a Razorbill egg in the same spot, and it fell off every time (I caught it to save it breaking)1. ‘This is it!’, I thought.

Then, with Jamie Thompson and another colleague, Bob Montgomerie, we devised some carefully controlled experiments to test our idea. Crucially, in a contemporaneous study – with another colleague, John Biggins – we had recently found a way of quantifying the shape of birds’ eggs for the first time (Biggins et al. 2018). Using three indices of egg shape, we confirmed that the pyriform shape of guillemot eggs is what determines their stability on a sloping ledge.

I had previously assessed the characteristics of a large number of Common Guillemot sites (the tiny area, sometimes only 10 cm across, where the egg is incubated) and found that over half of them were sloping. Guillemots typically breed at 20 pairs/m2 (but up to 70 pairs/m2), to minimise, through joint defence, the risks of predation of eggs and chicks. To breed at such high densities, guillemots have to be extremely flexible about their breeding site – as long as it’s very close to other guillemots.

If you look at guillemots breeding on sloping ledges, you see that they are invariably positioned so that the incubating birds are facing up the slope, with the blunt end of the egg facing away from them. This means that the maximum surface area of the egg – the long, relatively flat lower half of the egg – is resting on the substrate. It is this long region that keeps the egg stable on a slope: the longer this region, the more stable the egg. Stability on a sloping site is probably what allows guillemots to manipulate their egg safely during incubation and during change-overs. There’s no such problem for Razorbills, which invariably incubate on level sites as isolated pairs, and hence do not need a pyriform egg (Birkhead et al. 2018b).

While not discounting either the egg-strength or muck-minimisation ideas, on the basis of the evidence we think that stability of the egg on the ledge is the main selection pressure favouring a pyriform egg in the Common (and Brünnich’s U. lomvia) Guillemots. In other words, the pyriform shape is an adaptation to keep the egg safe on the narrow, often sloping ledges on which they breed – not by spinning or rolling in an arc, but simply by being less likely to roll in the first place.

Our results are also relevant to the broader issue of egg shape in all birds. Birds’ eggs vary enormously – pyriform in guillemots and waders, almost spherical in some owls, elongate in divers – and the evolutionary significance of these different shapes has long puzzled biologists. Stoddard et al. (2017) published the results of a large, comparative study and claimed that ‘flight efficiency’ explained the differences in egg shape across bird species. This implied that birds that were better flyers produced more extreme – more elongate, more asymmetrical egg shapes. This was exciting and the paper attracted a huge amount of media attention. 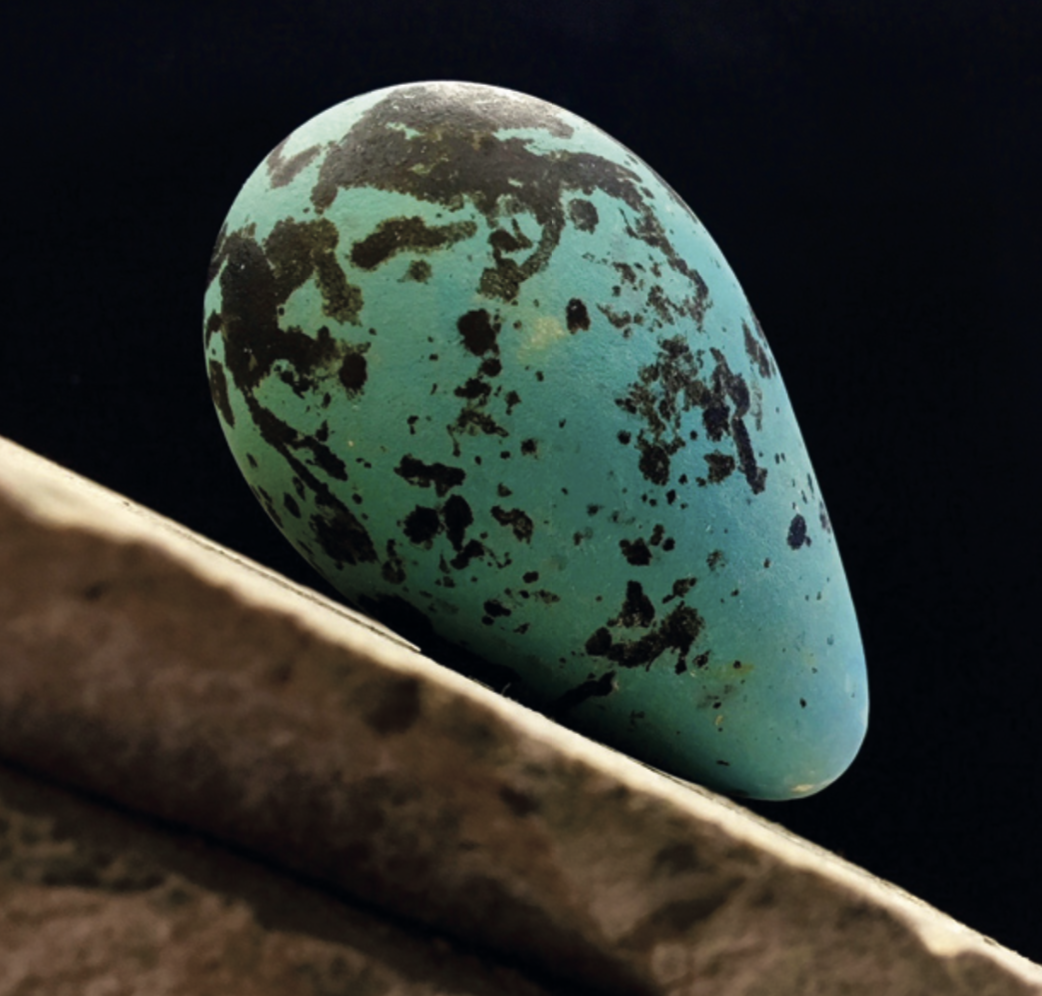 82. The pyriform shape of the Common Guillemot’s Uria aalge egg allows it to be stable on a sloping ledge, which means that it is more easily and safely manipulated by the incubating parents.

It seemed like a major discovery; yet upon closer examination we found three causes to be cautious. First, when we teased apart the complexities of their statistical analyses, we found that ‘flight efficiency’ accounted for only 4% of the total interspecific variation in egg shape. In other words, a lot of interspecific variation in egg shape remained unexplained. Second, their huge sample size was compiled using published (online) photographs of eggs in the Museum of Vertebrate Zoology at Berkeley. Those photographs are useful for documenting the collection, but are not appropriate for measuring egg shape accurately – to do that you need to ensure that the eggs are positioned perfectly horizontally, otherwise their shape in the resulting image is often distorted. Third, as shown by Biggins et al. (2018), and as they acknowledge, the method Stoddard et al. used to quantify egg shape was unable to deal adequately with pyriform eggs.

To test whether ‘incubation’ might be a better explanation for the evolution of egg shape, we compared the eggs of auks and penguins, two distantly related groups with similar ecologies and life histories and considerable interspecific variation in egg shape. Our results revealed that, for these two bird families, ‘incubation’ accounted for over 65% of the variation in egg shape (Birkhead et al. 2018a). Our goal now is to conduct a much broader comparative study to see whether this is true across birds as a whole. 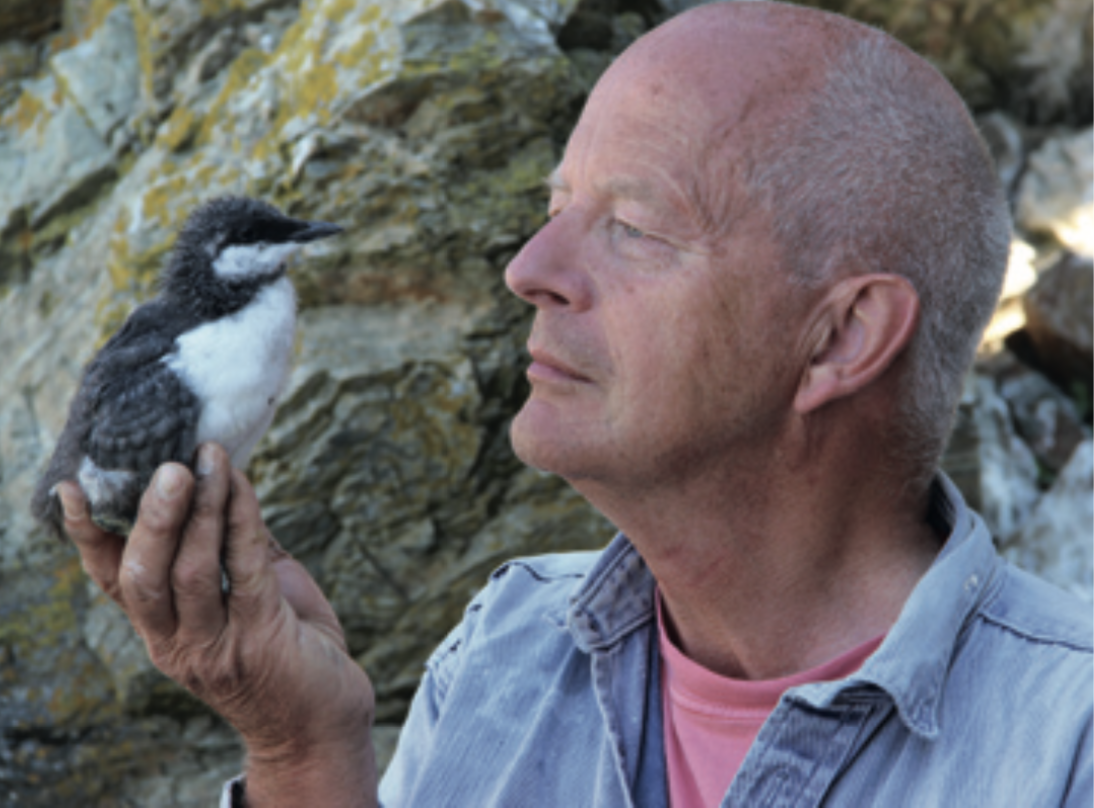 Tim Birkhead is professor of evolution and behaviour at the University of Sheffield. He’s been studying Common Guillemots on Skomer for over 40 years (and is pictured above on the island in 2018 with a Guillemot chick). He continues to seek public donations to maintain his long- term monitoring of the species on Skomer after Natural Resources Wales withdrew funding.