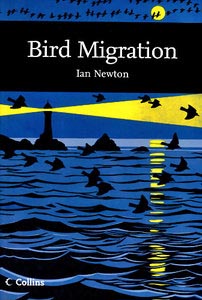 Ian Newton is one of the most prolific ornithologists of the last 40 years and his fifth book The Migration Ecology of Birds (hereafter MEB) deservedly won the BB/BTO Best Bird Book of the Year in 2008 (not the first time one of his books has been awarded that accolade). He has followed up this triumph with his second tome in the New Naturalist series, a treatise on migration that he presents as an abridged and updated version of MEB, albeit with a greater emphasis on Britain & Ireland and ostensibly directed towards a less academic readership. The 25 chapters cover both pattern and process in a similar order to MEB. The book begins with an introduction to the different types of migratory movements, the methods used to investigate them, and the principal migration patterns around Britain & Ireland. There follow reviews on more process-based topics dealing with physiology, timing, navigation and the impact of weather, before the latter stages of the book discuss the evolution (past and current) of migratory behaviour, finishing with a discussion of the biogeographical and ecological aspects of bird movements. The book is enlivened by over 200 images of varying quality, some of which are compromised by captioning errors (fig. 26 incorrectly states that White-fronted Geese Anser albifrons of ssp. albifrons have orange rather than pink bills and fig. 45 illustrates a Kittiwake Rissa tridactyla rather than a Common Gull Larus canus as captioned), at least some of which I am led to believe are down to errors introduced in the publishing process. Staying on top of the literature in such a big field is no mean feat and some of the papers highlighted were way off my radar; for instance, a Spanish study has revealed age differences in autumn fattening and hence migratory strategy in Savi's Warblers Locustella luscinioides, with adults being 'long jumpers' whilst juveniles migrate in 'short hops' to their tropical wintering areas. My knowledge of physiology is pretty rusty so it was a pleasure to review all the material on magneto-reception and cue-conflict experiments that have driven our understanding of how birds find their way. Any would-be student of migration ecology will find that Ian regularly highlights where the gaps in our understanding lie and which direction our future research efforts should take. Given my own interests in avian vagrancy, I'm perhaps better qualified to review the accuracy of the ample chapter on vagrancy than the remaining chapters. This is essentially an abridged account of the text from MEB but nonetheless does the field justice with a fairly thorough review of the evidence and competing theories constructed to explain the observed patterns of distribution. A minor niggle is the confusion of the status of some rarer species; for instance, the listing of Bluethroats Luscinia svecica (along with Northern Wheatears Oenanthe oenanthe, Common Redstarts Phoenicurus phoenicurus and Pied Flycatchers Ficedula hypoleuca) as a key component of east-coast falls is out of step with that species' current rarity along much of the east coast. Elsewhere, the retraction of the genetic diagnosis of 'Brown' for the infamous British 'southern skuas' was missed and there are no rather than 'numerous' spring records of Masked Shrike Lanius nubicus from Fennoscandia. That there are now two British autumn records of Masked Shrike (in comparison with one each from Finland and Sweden and two from Norway) undermines the utility of the 'reverse migration shadow' mechanism initially postulated to explain that species' absence from Britain & Ireland. Given the British and Irish focus in this volume, it is a shame that there are not one or more chapters summarising some of the regional patterns in bird migration, treating flyways such as the Wash-Severn route or comparisons of pelagic seabird distributions between the North Sea and the Atlantic. These minor gripes aside, this book is still a spectacular triumph. Ian's enviable talent for condensing centuries of research into a relatively terse package that reads like the works of the very best popular science authors should earn this volume its place on the bookshelf of every birder who has ever stopped to ponder the 'hows' and 'whys' of avian migration. Alexander C. Lees Â  Â  Collins New Naturalist 113 400pp, colour photos, maps, drawings Â  Hbk, ISBN 978-0-00-730731-9, £50.00Â Â Subbuteo code M20524 Pbk, ISBN 978-0-00-730732-6, £30.00Â Â Subbuteo code M20527 Buy this book from theÂ British BirdsÂ bookshop which is run byÂ Subbuteo Natural History Books.

This means thatÂ 5% of all sales generated byÂ British BirdsÂ subscribers, whether it is books reviewed in the journal, featured on its book page or listed on the Subbuteo website, will be paid toÂ British BirdsÂ - and will directly support the production of the journal. To browse the British BirdsÂ bookshop, please clickÂ here.
Volume:
Issue 7