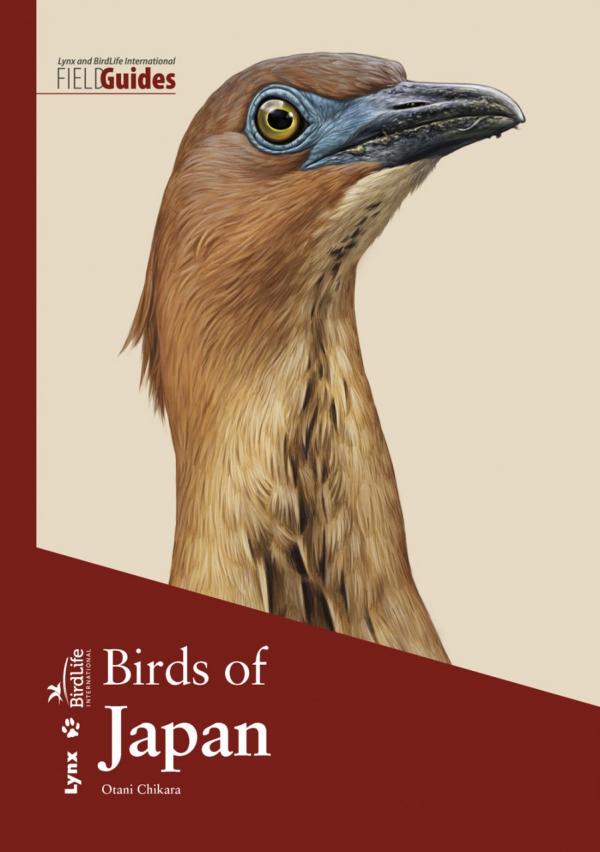 This exciting addition to the Lynx/BirdLife International ‘Field Guide’ series brings together all 740 species recorded from Japan plus a further 30 ‘hypothetical’ species not yet recorded from the archipelago but deemed likely to occur in the future. The softback review copy came in the ‘flexibound’ cover version – a tough but flexible plastic intended to be waterproof, and sporting a bold cover illustration by Ilian Velikov of a Japanese Night Heron Gorsachius goisagi, one of over 20 species endemic to Japan, which are indicated on the maps.

As birders invariably do, I turned straight to the species accounts, which occupy 337 pages, including 168 colour plates that illustrate all the species recorded from Japan, its main and outlying islands and the surrounding seas. Almost 25% of the species in this book are vagrants to Japan and more can be expected – but these are unlikely to be encountered by visiting birders on a short visit.

For most species the illustrations face the text and are taken from HBW and its spin-offs, and readers will recognise the work of many of the contributing artists included here; there are 26 in all. Each artist has illustrated particular groups so the style on most plates is generally consistent and pleasing. The illustrations are primarily of adult birds and both sexes are shown where their plumages differ. Breeding and non-breeding plumages are included where these vary and some juvenile/immature plumages are also illustrated, particularly for gulls and terns, but the selection isn’t comprehensive. The plates also feature refreshingly large and colourful distribution maps for all the regularly occurring species.

Turning to the accompanying text, each species is introduced by its English, Japanese and scientific names. At this point I realised that I should have delved into the introductory chapters beforehand to fully understand the format. Taxonomy and sequence follow the two volumes of the HBW/BirdLife International Illustrated Checklist of the Birds of the World (del Hoyo & Collar 2014, 2016) and subsequent updates adopted by HBW Alive and BirdLife. The concept of subspecies groups is introduced in this guide, subspecies groups being an informal taxonomic unit used to highlight seemingly monophyletic groups of taxa that at present appear to sit between the species and subspecies levels – although some may merit species rank and may already be treated as such by other taxonomic authorities. Their use in this guide is novel, and the species accounts treat each of these groups separately. Where relevant, these are identified in parentheses, enclosing the species-specific scientific name. For users familiar with IOC and Clements taxonomy, species sequence and English names, there is much here that feels unfamiliar, but this is quickly reconciled by the number of potential bonus birds gained by adoptingHBW/BirdLife taxonomy.

Each species account begins with a brief statement on status in Japan and its BirdLife conservation status, and is followed by a QR code linking to a relevant website page that provides additional audio-visual information. Thereafter, a concise account discusses species identification and comparison with similar species, and as each subspecies group is treated as a taxonomic unit, each potential split receives equal treatment, which is a refreshing improvement over many guides. Likewise, all vagrants and hypothetical species are treated on a par with the most numerous and widespread species within the body of the text, although these may have been better brought together as a group and separated from the regularly occurring species.

Turning back to the introductory pages, these discuss the history of ornithology in Japan, geographical scope of this guide, climate, key habitats, conservation and endangered species, followed by a review of birding in Japan and a summary of birding hotspots throughout the archipelago. They conclude with an explanation of the terminology and abbreviations used, a key to the distribution maps, and illustration of bird topography.

Overall, I enjoyed using this guide: the images are bold, large and stand out against a pleasing grey background, the maps are clear, colourful and easily understood and the text is adequate for most species. I also prefer the larger format of the Lynx Edicions/BirdLife guides (it measures 16 cm x 23.5 cm), with its generally larger illustrations and more detailed maps than its main competitors offer. My only disappointment was the relative sizes that some images are reproduced on the same plate – for example, the crests/kinglets Regulus and waxwings Bombycilla on p. 323 don’t sit comfortably together when they aren’t reproduced to scale, and why is the Wryneck Jynx torquilla on p. 225 so small compared with the accompanying kingfishers? There are several similar examples, but this is a relatively minor grumble given the overall accuracy of the illustrations. Armed with this guide, visiting birders should encounter few identification issues that can’t be overcome on a trip to Japan – it’s likely that the language and culture barriers may present greater challenges!