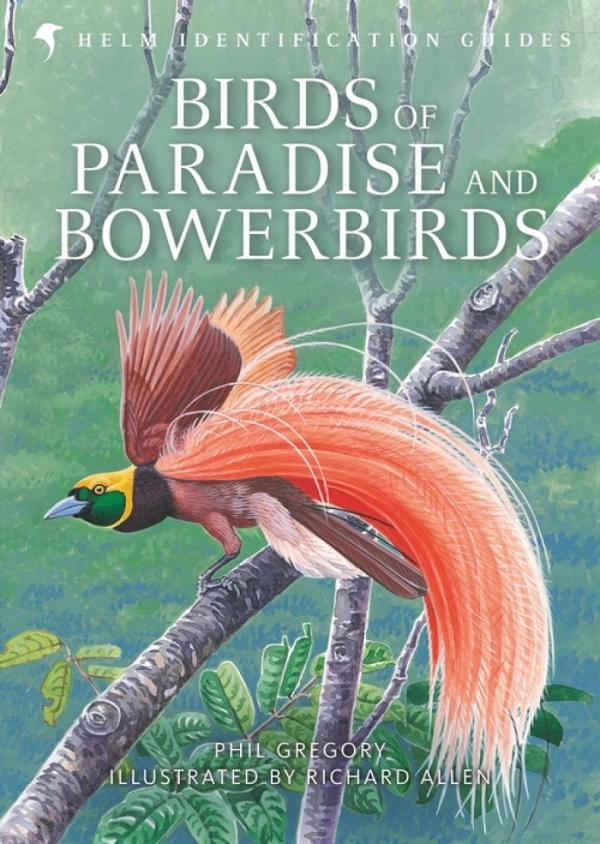 This is the latest in the Helm Identification Guides series of monographs and maintains the high standard set by previous volumes. Birds of paradise were first brought to our attention by David Attenborough in the TV series Quest for the Paradise Birds in 1957 and have appeared on our screens at frequent intervals ever since. Bowerbirds have received less exposure, although their remarkable bowers are well known to natural historians. The author acknowledges his debt to several sources, in particular the two Bird Families of the World monographs published by OUP in 1998 and 2004. He refers readers to these works for the vast amount of detailed information they contain, which is not appropriate for the general overview of the two families presented here.

The opening chapters ask two fundamental questions: ‘What is a bird of paradise?’ and ‘What is a bowerbird?’ In these we get an insight into the characteristics of each family, a taxonomic discussion of the origins of their different branches and sections on habitat, general habits, food and foraging, breeding (including the remarkable dances of some birds of paradise), bower designs (which can be split into maypole bowers and avenue-builders) and conservation. This is followed by an introduction to the species accounts and an extensive, 12-page glossary.

Richard Allen’s 41 plates are of remarkably high quality, not only for the accuracy and detail shown in the birds themselves, but also for the wonderful backgrounds, in particular the bowers. The colour of the plates is possibly rather less bright than I would have expected; for example, having seen Wilson’s Bird-of-paradise Diphyllodes respublica and King Bird-of-paradise Cicinnurus regius in life, I recall them as being brighter than shown in the book. The plates sit opposite brief descriptions of each species illustrated, with reference to the main texts and map which follow the plates.

Phil Gregory’s texts follow the usual format of this series with subheadings including Field identification, Vocalisations, Breeding behaviour and Status and conservation. The taxonomy used is up to date and adopts the recent recognition that the previously monotypic genus Lophorina actually comprises three species. Each species account includes a distribution map, and these work well for species with widespread ranges across New Guinea. For those with restricted ranges, however, it is hard to discern the detail, since the same map is used for each species. Larger-scale maps showing greater detail for those species with limited ranges would have been more appropriate. A liberal sprinkling of mostly high-quality colour photographs are scattered through the texts. Unfortunately, the book’s format limits the size at which these are reproduced, which in many cases doesn’t really do them justice.

The subject matter of this book is arguably outside the scope of British Birds but it should further raise the profile of these iconic birds across the world.