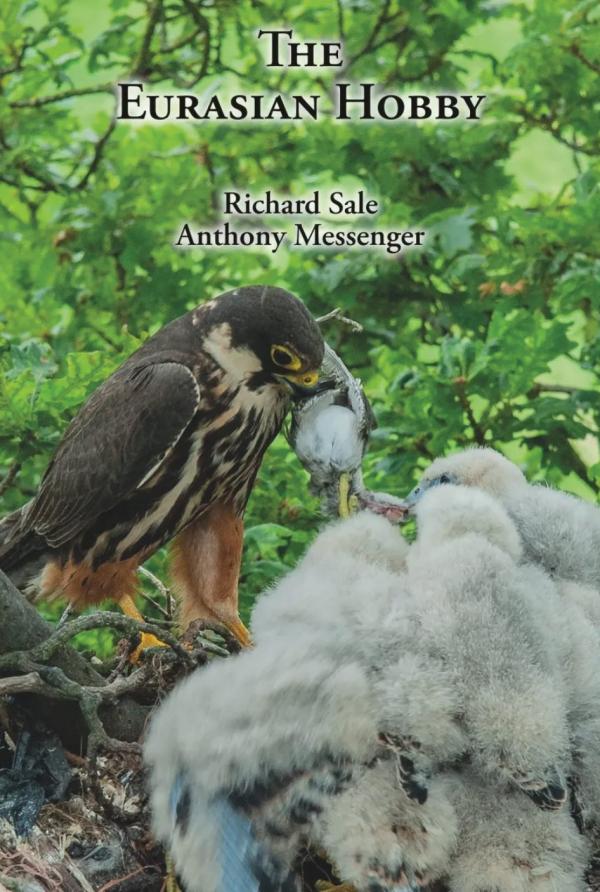 Many birders will count the Hobby Falco subbuteo amongst their favourite birds; but there are perhaps few amongst us that know much beyond the basics on such a private species, with experience limited to brief glimpses of this high-speed falcon on hunting sorties. This attractive and well-written book by Richard Sale and Anthony Messenger is an excellent way of overcoming that, and hopefully may inspire a few of us to take up personal studies on the species, albeit maybe not to the extent that the authors have.

What is perhaps unusual for a species monograph is the extent to which the authors draw on their own experience and passion for the species. In a lengthy opening chapter, Anthony Messenger describes how his interest in the Hobby was born and grew, and how he developed his study in Derbyshire, drawing on his original notebooks from the early 1990s. I found this fascinating, not just for what it reveals about the art of finding and observing Hobbies, but also for its insight into how a serious species study can evolve. Indeed, it serves as a guide to how one might develop a serious interest in any species, not just the Hobby; though, equally, it could be taken as a warning as to how obsession can take hold!

What follows is a meticulous and extremely detailed account of the Hobby and its behaviour and ecology, drawing on a wide range of published studies (presumably exhaustively so, although I am not well placed to judge) as well as the authors’ own work. After a general introduction, separate chapters are given to diet, hunting behaviour, breeding (split across two chapters), migration and wintering, interactions with other species, and, finally, the factors that act upon the species’ populations, both in Britain and elsewhere. I learnt a huge amount from all sections, although the detailed examination of the mechanics of Hobby flight and hunting, complete with equations and findings from studies on Richard Sale’s captive Hobby, Milo, was heavy going in places.

With over 80 figures, nearly 500 references and detailed and lengthy chapters, this isn’t a light read, and in places contains material somewhat tangential to the core subject. However, the prose is readable and complex issues are explained clearly, with jargon kept to a minimum. The inclusion of findings from the authors’ own studies, and occasional personal observations – such as the suggestion that aerial copulation by Hobbies ‘smacks of showing off’ – helped to keep me engaged. The authors’ fascination with the species shines through. The book is illustrated with nearly 200 photos, mostly of a high standard, taken mainly by Richard Sale himself and showing every aspect of the life of Hobbies as well as many of their prey species. Indeed, given this is such a handsome species, the book is worth acquiring for the photos alone.

It’s hard to imagine that there is any relevant information currently known on the Hobby missing from this tome. It is both an excellent introduction and a comprehensive reference to the species, and a primer for those wanting to study the species themselves – there is, as the authors themselves acknowledge, still much to be learnt about the status of the species in Britain.