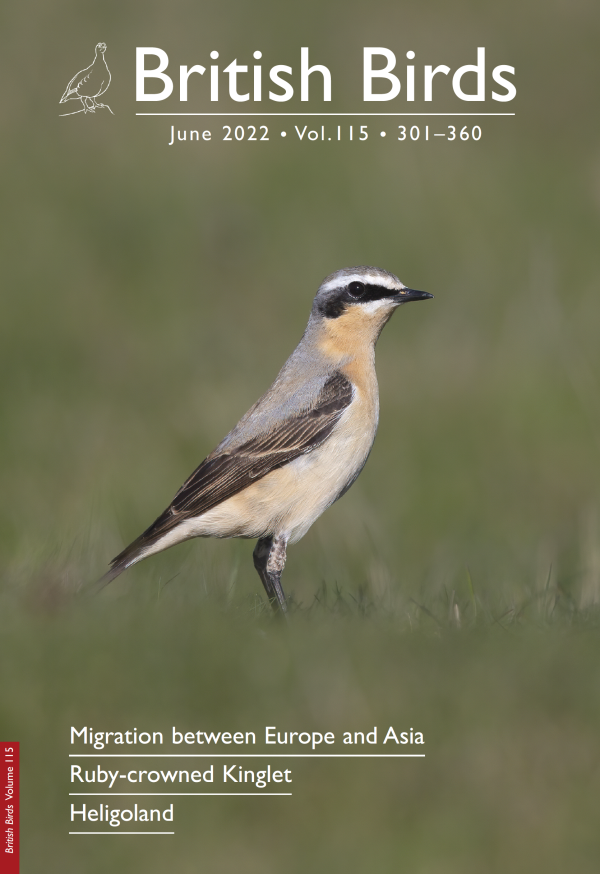 324      Ruby-crowned Kinglet in the Outer Hebrides: new to Britain

The distances travelled by some species of bird are mind-blowing. We’re all aware of the species that migrate between Europe and Africa each year – but there is also a substantial movement of birds between Europe and Asia, which is often overlooked. Individuals of some species, such as Fieldfares, Redwings and Waxwings, which regularly spend the winter in Britain, could well have originated from breeding grounds in central Russia. Similarly, a small number of European-breeding species, such as the Rustic Bunting, migrate from the western edge of the species’ breeding range to their wintering grounds in Asia. In the case of Rustic Buntings, that means to eastern China. Ringing recoveries have provided evidence of some remarkable movements of birds between Europe and Asia, and they’re summarised in this issue.

Emphasising further the remarkable capabilities of birds to travel, this month’s BB also contains a write-up of Britain’s first – and the Western Palearctic’s sixth – Ruby-crowned Kinglet: a bird weighing less than a pound coin that made landfall in the Outer Hebrides having crossed the Atlantic. A breathtaking journey for such a small bird.

A stop-off point for many birds on their journeys, Heligoland, a rocky island off the north coast of Germany, has long been a centre for the study of migratory birds, with impressive falls occurring when conditions are right. The island has also become a mecca for German birders and rarity-hunters and has an impressive list of national firsts. In our third main paper, an overview of the island’s birds and birding is given.