Morocco: sharing the birds. A Sound Approach guide to birds of the Maghreb

Morocco: sharing the birds. A Sound Approach guide to birds of the Maghreb 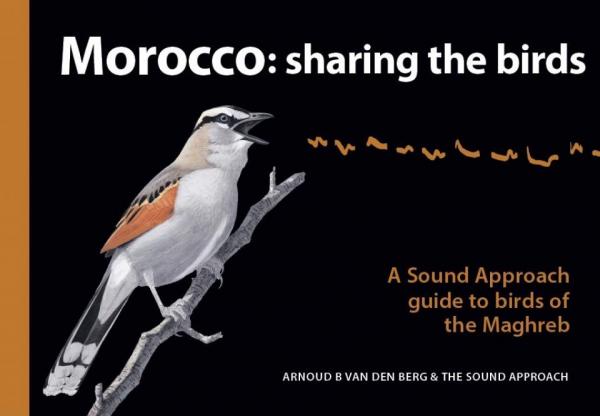 This is the sixth offering from the Sound Approach team and one that many birders will have been eagerly anticipating. In it, listeners and readers join Arnoud van den Berg on his birding and travel adventures through Morocco, a country he first explored in 1973 and has visited regularly since 1987.

The distinctive format and style follow previous Sound Approach publications, lavishly illustrated with photographs and annotated sonograms. A USB flash drive provides the soundtracks that accompany the text and two attractively produced ‘e-booklets’; it also acts as a bookmark. Some 573 soundtracks feature the vocalisations of 141 key northwest African and Maghreb species and distinctive races.

Arnoud uses the introduction to describe his early visits, outline the strategic importance of Morocco to birds migrating between Europe and Africa, explore threats posed by hunting and climate change, and delve into the cultural importance of the region. Sixteen chapters follow which describe some of Morocco’s most appealing and sought-after species and highlight their vocalisations. The first chapter features the lost sounds of the Slender-billed Curlew Numenius tenuirostris, the one species that listeners won’t be finding in Morocco today. Technological wizardry allows us to listen to Magnus Robb’s reconstruction of Adam Gretton’s recording of its call, captured in January 1990 at Merja Zerga, the last known wintering location. This is the only known recording of the Slender-billed Curlew.

Chapters on extant species follow, beginning with the Waldrapp (Bald Ibis) Geronticus eremita, which survives in just two protected coastal colonies. The Houbara Bustard Chlamydotis undulata was another species in serious trouble, owing to unsustainable hunting by falconers, but now ‘saved’ by reintroduction programmes established by Arab nations. Another species to benefit from a reintroduction programme is the Double-spurred Francolin Pternistis bicalcaratus, which is now readily encountered by those who search within its limited range. Not so the Andalusian Hemipode (Small Button-quail) Turnix sylvaticus, which is confined to a narrow strip of coastal cultivation. The population of this enigmatic species is undoubtedly small but the mooing call of the female barely travels more than 25 m, so it’s easily overlooked.

The remaining chapters move on to species that aren’t threatened and which most birders can reasonably expect to encounter on a visit to Morocco. Chapter six compares the three nightjar species that breed in Morocco, and includes wonderful photographs and recordings of each, including a threatening Golden Nightjar Caprimulgus eximius from southern Western Sahara. Further chapters review the five sandgrouse species, debate the songs of the Zitting Cisticola Cisticola juncidis (a potential split), explore the trilling songs of the Bonelli’s Warbler complex (a cryptic third species in the offing here) and compare the very different songs of the Black-crowned Tchagra Tchagra senegalus from the extreme limits of its range, in Morocco and Oman.

Extended chapters take listeners through the vocalisations of Morocco’s 17 (or more?) lark and ten wheatear species, each lavishly illustrated with photographs and sonograms that accompany the soundtracks. The case is made for splitting the African and Arabian forms of Dunn’s Lark Eremalauda dunni and ‘Seebohm’s Wheatear’ Oenanthe (o.) seebohmi from Northern O. oenanthe, each supported by a full-page plate by Killian Mullarney that pinpoints unfamiliar but key differences. Chapter 13 features the taxonomy and songs of the Streaked Scrub Warbler Scotocerca inquieta complex; of the eight recognised races the differences between S. i. saharae in Morocco, S. i. striata in Oman and nominate inquieta in the Levant region are illuminated with recordings and photographs, but the species’ range extends into Central Asia where other races occur. As yet, the Sound Approach haven’t plunged into a splitting frenzy but they have primed for what we can expect when DNA analysis determines the genetic distances between the various taxa. In the meantime, listeners are able to draw their own conclusions.

The book concludes with chapters describing Cricket Warblers Spiloptila clamans in Western Sahara in 2007, the ‘Common Chaffinch’ complex in North Africa (comprising Atlas Fringilla africana, European (Common) F. coelebs and Tunisian F. spodiogenys), and concludes with the changing fortunes of the Desert Sparrow Passer simplex in the huge dune complex at Merzouga, close to the border with Algeria.

This is a wonderful book, packed full of useful information, and it is a skilfully produced and beautifully illustrated volume. It will appeal to readers at many levels, and Arnoud brings it to life with his colourful stories and anecdotes describing his adventures in search of the charismatic Maghreb species. It would undoubtedly be the first choice for my Christmas stocking if I didn’t already have the review copy.

Flights of Passage: an illustrated natural history of bird migration