Rare breeding birds in the UK in 2011

The 38th report of the Rare Breeding Birds Panel includes details of 88 species or distinctive races that bred (or showed signs of breeding) in the UK in 2011. As in 2010, numbers of some resident or partially migratory species in 2011 were affected to some degree by the severe weather in the preceding winter (December 2010 was the coldest December for over 100 years according to the Met Office). However, February 2011 was the mildest since 2002 and the spring was warmer than average, especially April. It may have been the meteorological conditions in southern Europe that led to the largest number of Common Quails yet recorded in any year (1,992 singing males) and this influx is examined in this report. That total was undoubtedly boosted by the impact of fieldwork for the final season of the BTO/BirdWatch Ireland/SOC Bird Atlas 2007-11 project, which also had an effect on the recording rate of some other species. The impact of recent cold winters led to reduced numbers of several species including Bearded Tit Panurus biarmicus, Cetti's Warbler Cettia cetti and Dartford Warbler Sylvia undata, and may have held back the growth of the Little Egret Egretta garzetta population witnessed in the last ten years.

Eurasian Spoonbills, Holkham, Norfolk, May 2011. Successful breeding was reported for the second consecutive year at Holkham. Pic by Andrew Bloomfield

Eurasian Bitterns Botaurus stellaris continue to increase in numbers and range, and Little Bitterns Ixobrychus minutus bred again in the extensive Avalon Marshes in Somerset. This area is becoming renowned for its marshland bird community, and Great White Egrets Ardea alba were almost added to the list of breeding birds in 2011 (but in the end we had to wait until 2012 for proof of breeding). Somerset was the county which saw the first breeding by Cattle Egrets Bubulcus ibis in 2008, but there has been no confirmed breeding since then and there were no records in 2011 even to warrant an entry in this report. Eurasian Spoonbills Platalea leucorodia had a second successful season in Norfolk with an increase to nine pairs. We report the highest-ever totals for five species of raptor: Red Kite Milvus milvus, White-tailed Eagle Haliaeetus albicilla, Northern Goshawk Accipiter gentilis, Osprey Pandion haliaetus and Peregrine Falcon Falco peregrinus. Signs are not so good for Hen Harrier Circus cyaneus, however, especially in England, which now supports fewer than ten pairs. In 2011, Avocets Recurvirostra avosetta bred at over 100 sites, the first time that milestone has been passed. A national survey of Dotterels Charadrius morinellus updated the population estimate to 423 breeding males, a significant decline since the last survey, in 1999. In contrast, we include the highest-ever totals of both Green Sandpiper Tringa ochropus (up to six pairs breeding) and Wood Sandpiper T. glareola (up to 29 pairs breeding). Two passerines that have always been rare in the RBBP era (since 1972), but which were more numerous in earlier reporting years, are Golden Oriole Oriolus oriolus (with a peak of 41 pairs reported in 1988) and Red-backed Shrike Lanius collurio (64 pairs in 1977). These two species had differing fortunes in 2011. The Golden Oriole has now not bred for two years and there was little evidence of a breeding attempt in 2011, whereas Red-backed Shrikes again nested in Devon and there was a total of up to four pairs in England. Order yourÂ back issue, or subscribe today 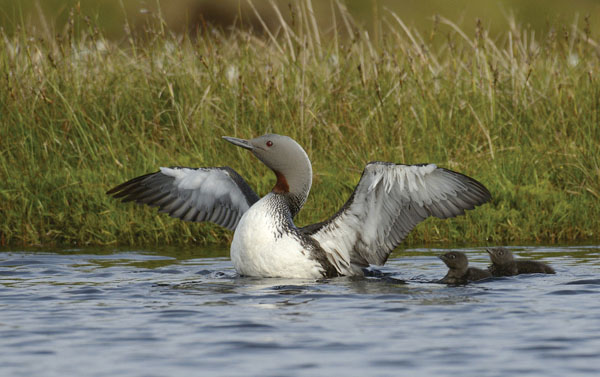 Red-throated Diver with chicks, Shetland, June 2011. The best coverage of Red-throated Divers is achieved in survey years, the last being in 2007 when the total was estimated to be over 1,200 pairs. Annual monitoring of productivity and counts of pairs in study sites continues in other years in Orkney and Shetland. Pic by Brydon Thomason
Volume:
Issue 9
Click here to download the full article as a PDF
Start Page:
496
Display Image: