There will be a gap in the countryside near Bristol this spring, with Robin Prytherch no longer there to watch ‘his’ Common Buzzards Buteo buteo going about their daily lives. A remarkable 40-year study has thus come to an end, although it was his firm opinion that they were studying him as much as he was studying them! Fortunately, he left us a full account of his side of the story.

Robin died on 3rd March 2021, when prostate cancer eventually overtook him. He was born on 21st October 1939, spending his early childhood in Hastings, Sussex. His interest in birds started during his time at Royal Wanstead School, Greater London, where he undertook a breeding bird survey of the school grounds. Next came a spell at Enfield Technical College, followed by a post as a draughtsman and structural designer at Dexion Ltd. In the mid 1960s, he left London for Bristol, where he lived from then on. He joined the BBC Natural History Unit in 1968, initially as a researcher and later as a producer, before going freelance in 1991. His bird behaviour and identification expertise were highly valued, particularly on programmes such as Go Birding and Birdwatch. He worked on a wide range of radio and television programmes and was particularly proud of ‘Beneath the Greenwood’, an episode from a ten-part series entitled The Living Isles. Filming raptor migration in Israel was right up his street, while he found the live broadcasts from Florida, Kenya and the Camargue, France, particularly rewarding. A six-month period in South America for Jeffery Boswall’s Wildlife Safari to the Argentine was maybe the most challenging project, but they all provided him with a fund of amazing stories for winter evenings with friends.

On arrival in Bristol, he soon joined the committees of the naturalists’ societies for both Bristol and Somerset. Later, in 1967, he and a few others founded the Bristol Ornithological Club (BOC). BOC grew rapidly, producing a monthly newsletter and organising field trips, meetings and surveys. Robin was always a key player. He was Chairman from 1972 to 1975 and remained on the club’s committee until 2013. What Ian (D. I .M.) Wallace has called ‘purposeful birdwatching’ was always close to Robin’s heart and he was the driving force on the editorial panel for the club’s long-running journal, Bristol Ornithology, where club members were encouraged to publish the results of their studies, whether far flung or local.

A long-standing member of the BTO, he served on its Membership and Development Committee for several years and participated in many of its surveys, including the Heronries Census, for which he made heronry counts at Chew Valley Lake and Cleeve, the latter for over 50 years. He gained his ringer’s ‘A’ permit in 1965, becoming a mainstay of the Chew Valley Ringing Station, and was particularly committed to training newcomers.

Robin’s own Buzzard studies were focused on a 75-km2 patch of farmland west of Bristol, where he could be found throughout the year. As well as mapping the ever-increasing number of territories, rising from 13 in 1982 to an amazing 119 in 2019, he carefully observed the birds’ social and breeding behaviour, their choice of nest sites, and the range of prey items they brought to their young. He ringed as many chicks as he could, remaining an agile tree-climber well into middle age. In due course his results appeared in several key papers in British Birds, illustrated by his own line-drawings. He also provided artwork for books such as Derek Goodwin’s Birds of Man’s World (1978), Ken Simmons’s The Sunning Behaviour of Birds (1986), and Michael Bright’s The Private Life of Birds (1993). An annual treat for many of us was the arrival of his Christmas card, illustrating one or more Buzzards chosen from his study group with a tale of what they had been up to.

Robin added one species to the British List–Pied-billed Grebe Podilymbus podiceps–when he found a bird at Blagdon Lake in December 1963. The species was chosen as the logo for BOC, with Robin providing the artwork. In addition to his Buzzard studies, he published many shorter items in British Birds and elsewhere, such as his 1976 paper with A. H. Davies on distinguishing Short-eared Asio flammeus and Long-eared Owls A. otus. He was a long-term subscriber to BB and joined the Editorial Panel in 1988, remaining a member until the end of 2020. When the journal went through a rocky period in 2000, Robin was among those who sprang to the rescue, joining the Trustees and Directors of the new company that took over publication until the finances were back on an even keel.

Apart from birding, Robin’s main interest lay in music, with a particular penchant for Rachmaninov, Delius, Elgar and other similar composers. He was a regular at the Three Choirs Festival, the opera and the ballet, though he admitted to sometimes closing his eyes during the latter, finding the dancing a distraction! When the Wexford Festival Opera staged one of the rarely performed operas by Delius, he took the ferry across to Rosslare, spending his evenings listening to the music and his days looking for geese.

One’s abiding memory of Robin is of how generous he was with his time and words of encouragement, especially for newcomers to birding. He took great enjoyment from the social side of birding, rarely missing the BTO’s conferences in Swanwick and relished helping on the BB stand at the Birdfair – just two of the places where he could meet up with his many friends, both old and new. It is such a shame that Covid-19 restrictions meant so few of us could come to visit him during his final year – there would undoubtedly have been a long queue at his door.

On a blustery day in March, family and friends – wearing masks and limited in number by Covid-19 restrictions – gathered to celebrate Robin’s life. The service was a humanist one, with the burial in a memorial woodland site. His wicker coffin, decorated with flowers and his binoculars, set the scene for a series of tales from his long and varied life: Buzzards, steam trains, tree climbing, music, opera, ballet, owls, amazing trips producing programmes for the BBC Natural History Unit, leisurely lunches and, of course, those meticulously drawn Christmas cards.

We listened, remembered, then walked slowly to Robin’s resting. Robins and Wrens sang while a Green Woodpecker ‘yaffled’ from the surrounding woodland. Later, over the Gordano Valley, Common Buzzards were circling high in the blue sky. Thank you, Robin, for the time you spent with us all. Rest well. 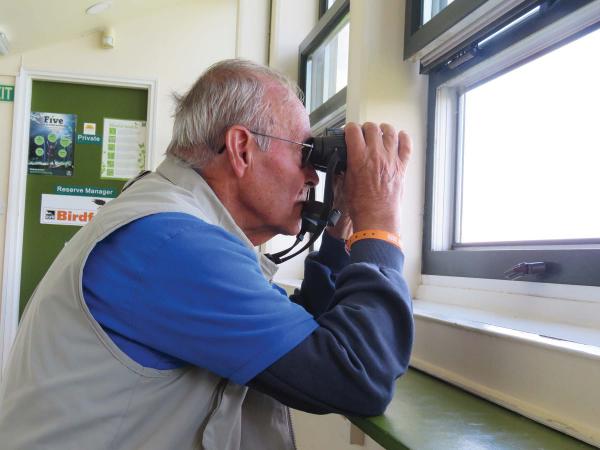 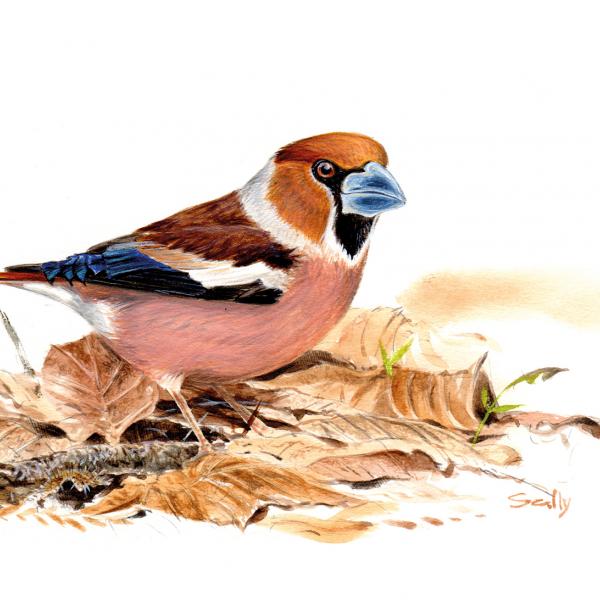 Rare breeding birds in the UK in 2018