Why Do Birds Suddenly Disappear? 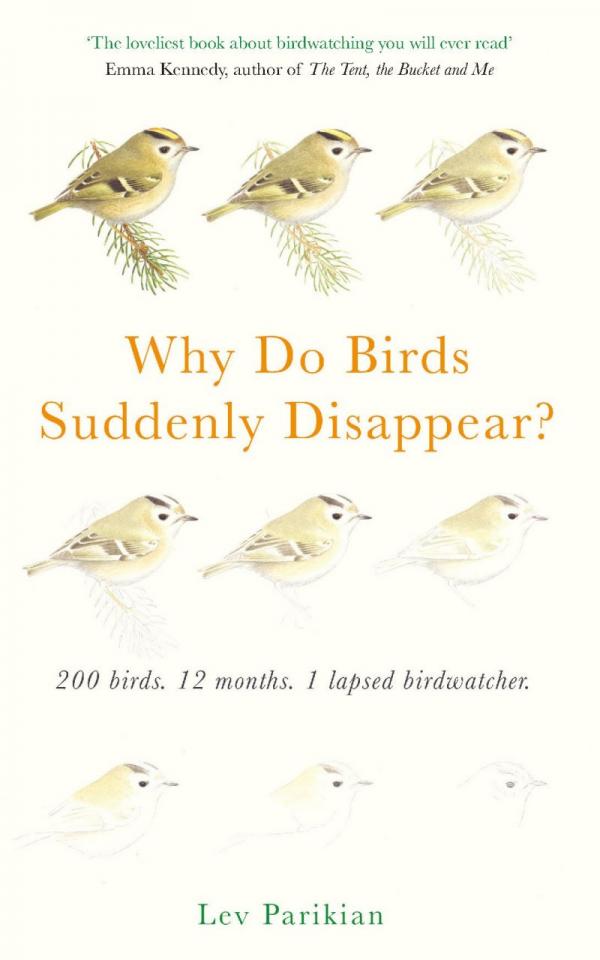 Hbk, 264pp; no illustrations or photographs

There has been a rather large bag of books on birding over the years, and I have to say my favourite has always been Ken Kaufman’s deservedly popular Kingbird Highway. In my younger days, Ken’s tales of a manic year list became something of an iconic tome for me. Now, and unexpectedly, Lev Parikian has entered this genre with Why Do Birds Suddenly Disappear? It’s ostensibly a book about one man’s British year-listing journey, but from the opening chapter describing the delights and surprising history of an old teapot and how it’s possible to become an accidental collector of toast racks, it’s clear that this is not going to be just another memoir of one man’s quest for a big year list.

To begin with, Lev is what we would call a lapsed birdwatcher. Memories of a childhood spent poring over the Reader’s Digest Book of British Birds come complete with the honest realisation he was a rampant childhood stringer. But, importantly, these memories trigger a renewed interest in birds, and, at the age of 50, he sets himself the target of seeing 200 species in one year in an effort to become reacquainted and reconnected with birds, and, perhaps more importantly, with himself.

The question of whether a target of 200 in one year is too low is quickly answered with ‘not if I want to retain my dignity, sanity and family’; and that is the essence of this lovely and genteel journey through a birding year. There are no (well, almost no) twitches, no tales of cramming eight mates into a Ford Capri and driving to Wick via Minsmere, no living off cat food and dog biscuits to divert funds into birding, no near misses and no family breakdowns. This, in contrast, is a warm cup of cocoa that you can curl up with and enjoy the wonderful language and turn of phrase that Lev delivers so well.

There is great pleasure in reading about Lev’s reawakening. The way in which he describes learning Dunnock Prunella modularis song is relatable to all of us at some level, and it’s a relief to me that even a classically trained conductor can struggle with remembering avian vocals. The reason why he swears every time he sees a Common Buzzard Buteo buteois a surprisingly hilarious anecdote, but it’s far from the only one and I’ll never listen to a European Nightjar Caprimulgus europaeus in quite the same way again, as the delight in learning, recognising, knowing and then finally and exquisitely seeing a bird is all encapsulated here.

While I enjoyed the pleasure Lev takes in learning and recognising birds, it’s the notes on his interactions with fellow birders that get you really immersed. It is very much a human story as well as a birding one, and there are plenty of human observations mixed into the birding tales, with his family and new friends taking centre stage on occasions, while the many childhood memories conjured up really do add a sepia-toned nostalgia. I found this to be a fully absorbing narrative, highly amusing and always very readable. I think the following passage from the book sums it all up very nicely

‘No matter that I’ve regained contact with the sights, sounds and smells of the natural world, discovered new parts of the country and been for more family mini-breaks in a year than in the whole of the previous decade. No matter that I’ve become fitter, lost weight, met new people and relearned how to learn. No matter that I’ve revisited my youth, made myself soggy with nostalgia, and found new perspective on the meaning of parenthood, as well as the importance of carpe-ing the diem.

This really is a book that could convince many people to try birding, and it certainly reminds those of us who are old hands why we do it. It will also serve as an excellent read for birding partners, wondering what all the fuss is about and hoping to understand the allure of the feathered ones. This, I think, is perhaps its greatest achievement and certainly something that is probably unique in the genre. Yes, I have a new favourite, and this will take pride of place next to Kingbird Highway on my shelf, but importantly, this will be the one that I recommend to birders and non-birders alike.