Gulls of Europe, North Africa, and the Middle East: an identification guide 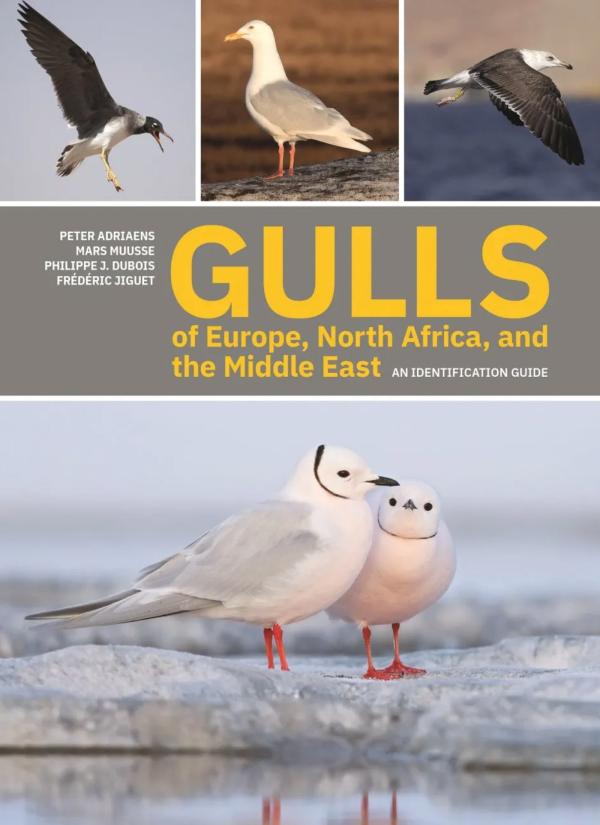 This photographic guide’s preface sets out its aims: ‘This book is for those weird but wonderful people who enjoy identifying birds – all birds’. It goes on to (hopefully) enthuse and infuse all birders with a deeper interest in gulls: ‘In many ways, gulls teach you how to properly identify birds: not just by impression, but also by careful attention to feather minutiae.’ I know, from my experience of guiding groups, that identifying gulls is challenging for many people, but there is nonetheless a real interest in ‘sorting them out’ by piecing together the jigsaw of age, structure, plumage and moult. Despite, or perhaps because of their complexity, this can give a satisfying sense of achievement to all levels of birders. In essence, the book’s goal – to provide a ‘clear and concise guidebook’ to gulls of the Western Palearctic – is successful. Utilising a multitude of photographs, which show side-by-side comparison of plumages (and similar species), with pointers used to focus on key features that aid identification, plus minimal text, written by birders who really know the subject, this book feels like the best yet on the identification of gulls in the region.

A 25-page introduction, which is succinct yet thorough, deals with all the ‘background’ elements that will help the reader to understand the accounts and basics of gull identification. The title broadly follows IOC taxonomy, with a brief taxonomy section that discusses two divergences: with foresight, Short-billed Gull Larus brachyrhynchus is split from Common Gull L. canus (post-publication, this split was adopted by the IOC); and ‘Thayer’s Gull’ L. (glaucoides) thayeri, which I was pleased to see is treated as a full species by the authors, who question the evidence used to recently lump it back with Iceland Gull L. glaucoides. The rest of the introduction, the ‘How to Identify’ section, deals nicely with size, topography, ageing and age terminology, plus moult, with plenty of photographs that examine them in general as well as specific examples to help understand the rules and exceptions from them.

The nitty gritty of the species accounts follows the introduction. They cover ‘all gull taxa that have been recorded in the wider Western Palearctic at least once’ and take up the bulk of the book. The 35 species (plus multiple distinctive subspecies) herein are treated well, with texts differing in length according to the number of plumages and difficulty of identification. Some species get four pages (e.g. Slender-billed Chroicocephalus genei and Ivory Gulls Pagophila eburnea); others get six (e.g. Pallas’s Ichthyaetus ichthyaetus and Ring-billed Gulls L. delawarensis); the majority of larger gulls get eight (e.g. Glaucous-winged Gull L. glaucescens) or ten (e.g. Caspian L. cachinnans and Slaty-backed Gulls L. schistisagus). Some species, such as Common Gull, get a much longer account, with 20 pages across three separate entries covering nominate canus, ‘Russian Common Gull’ L. c. heinei and ‘Kamchatka Gull’ L. c. kamtschatschensis.

The accounts break down into a brief description of size and structure, then adult plumage (often a double-page spread) followed by first-cycle, second-cycle and third-cycle (again often two pages, but sometimes more in difficult species such as ‘Azores Gull’ L. michahellis atlantis). Some may find it strange that there are relatively few fully juvenile birds illustrated: Caspian Gull has one, but Yellow-legged has none. Each age has minimal text, but many well-chosen photographs – of birds perched and in flight – aid identification using pointers to show the key features. The photographic examples utilised have been digitally ‘stripped’ from (most of) the natural surroundings and placed against a very pale blue- grey background; the layouts work well with slightly larger images used for the main species being discussed and slightly smaller images in a pale yellow-buff box that illustrate ‘similar taxa’. These boxes can be especially helpful. As an artist, I personally like the pages with more images, where the design of the page is full and there is less ‘empty’ background. In one or two instances, the cropping of an image has created a slightly odd, ‘wasted’ or ‘scrawny’ look to some of the birds depicted, e.g. the White-eyed Gull I. leucophthalmus and juvenile Audouin’s Gull I. audouinii; this may be an optical illusion or perhaps a digital artefact.

No actual size measurements or weights are given in the book. This is not in itself a problem, but I found the line the authors draw between ‘smaller’ and ‘medium-sized’ gulls a bit arbitrary. These are not necessarily based on physical size, genus or rate of moult, but more plumage type, and so it seemed a bit arbitrary to class Grey-headed Gull C. cirrocephalus as small and Relict Gull I. relictus as medium-sized. The designation of size in the introduction had no relevance in the order of the gulls later, other than in the brief paragraph at the beginning of each account.

In my opinion, some books are so wordy that picking through what seems at first impenetrable text for the key features on which to focus is difficult; this could not be said of this book, where the use of many images pointing to those crucial elements is much clearer and easier to interpret. Even though I consider myself ‘fairly good at gulls’, such are the credentials of the four authors that to question the authority of the text is difficult. I looked closely at species I know well and felt happy with them, though perhaps at times there was an element of oversimplifying the description of features: the greater coverts of first-cycle Caspian Gull are described as ‘uniformly brown… with white tips’, whereas on many there is internal ‘marbling’ or pale markings that critically differ in shape from the large white notching on the inner greater coverts of Yellow-legged Gull. There are other subtle elements like leg colour that may have been pointed out, but it could well be that the authors feel other features are more critical to identity than others.

No matter what your experience of gulls might be, there is certainly plenty to learn in the book and I have already enjoyed reading the Slaty-backed and Heuglin’s/Steppe Gulls Larus fuscus heuglini/barabensis sections carefully. I will continue to delve into it time and again, especially the pages on Common Gulls, and I am sure that this will become my ‘go-to’ textbook on gull identification. It is an excellent book and I highly recommend it to anyone interested in identifying gulls, whatever their ability.