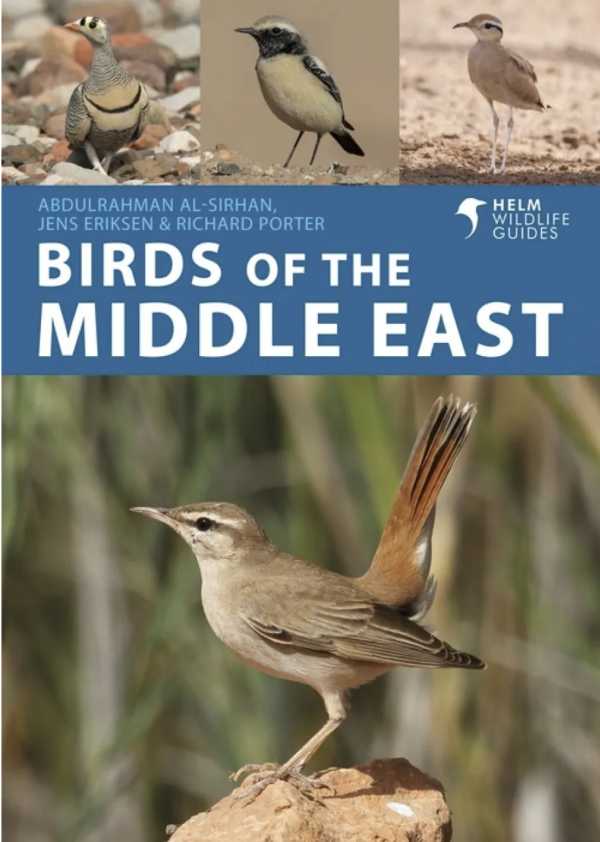 This is the second compact, photographic guide to the birds of the Middle East to have been published in recent months. Species texts take a half or full page, typically with two or three photos that show a perched individual, an individual in flight and, where plumages differ significantly, male and female or breeding and non-breeding birds. The photographs are typically of excellent quality and cover variation well, with just a few exceptions – White Wagtail Motacilla alba shown only from the front, Saunders’s Tern Sternula saundersi only in breeding plumage, and no female Sardinian Warbler Curruca melanocephala were the most obvious nit-picking omissions I could find (with the last being described in the text as ‘less distinctive [than the male]’).

The guide makes no secret of not being comprehensive in its coverage. Of the 800 or so species recorded in the region (the Levant, Iraq and the Arabian Peninsula), 320 are covered here. It’s hard not to draw comparison with A Naturalist’s Guide to the Birds of Egypt and the Middle East by Richard Hoath (Brit. Birds114: 776–777), which covers 280 species – but has a geographical coverage that extends to Egypt. Neither book covers range-restricted species such as Omani Owl Strix butleri, Forbes-Watson’s Swift Apus berliozi or the various species found only in the southwest Arabian highlands of Saudi Arabia and Yemen.

The aims of this book are well summed up in the opening lines of the introduction: ‘This photographic guide is aimed mainly at those adventurers who, on their travels to the Middle East, would like to spend some time watching the exciting birds that the region has to offer. We also hope it will encourage those who live in the region to take an interest in its wonderful birds and their conservation.’ The authors direct those whose primary purpose in the region is birding to Porter and Aspinall’s more complete 2010 title of the same name.

Similarly priced and sized to A Naturalist’s Guide…, both fit the bill for a book that can be kept in the side pocket of a backpack for occasional use. Al-Sirhan et al. is overall the better book in terms of the more comprehensive coverage (both of plumages shown and of species within the given region), but Hoath has the advantage of also covering Egypt. Ultimately, readers will have to choose which guide works best for them; for those whose travels are restricted to the Arabian Peninsula, the greater number of species and broader coverage of different plumages gives the title reviewed here the edge.